Sales continue on the rise in Iceland (+73%), leading to a market share of 19%, this plug-in market is now sailing through the mainstream market, being only the second market to do so, after Norway having shown the way.

Looking at the models ranking, the Mitsubishi Outlander PHEV continues as strong as ever, having already registered 195 units this year, followed at a distance by the two Volvo SUV's: the XC60 is Second, with 43 units, while the XC90 PHEV is Third, with 37 registrations, making it a 100% SUV podium.

The best selling BEV is the VW e-Golf, in Fourth, but this is another market where Nissan has a hundreds-long waiting list for the new Leaf, so the Japanese hatchback should retain the Best Selling BEV award in 2018, and maybe even have a shot at outselling the allmighty Outlander PHEV. 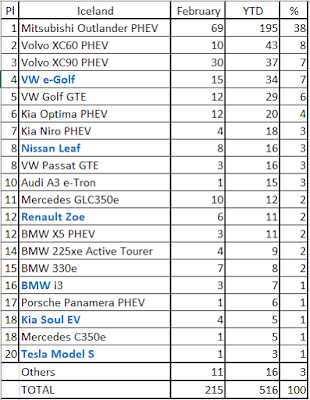