While growth is always good, especially in a low share market like this one, it is sad to see that this previously BEV-predominant market, now has PHEVs (52% share) outselling all-electric vehicles.

Nevertheless, the big splash this year is coming from a BEV, with the Smart Fortwo ED being responsible for 1 out of 4 registrations this year, and delivering more units in two months, than in the whole year of 2017.

The other headlining change was the Porsche Panamera PHEV jumping from an already impressive #11 in 2017, to Second Place(!) this year, an amazing feat for the six-figure priced car, making it the highest standing for the Second Generation Porsche Sports Sedan, anywhere.

Another surprising performance comes from the Hyundai Ioniq PHEV, #8 this year and the first time a model from the Korean brand sells in significant volumes here.

Looking at the manufacturers ranking, Smart is now in the lead, with 26% share, overcoming last year leader BMW (15%), in Second Place, while Mercedes (8%) is looking to keep its podium place from the hands of Porsche (7%). 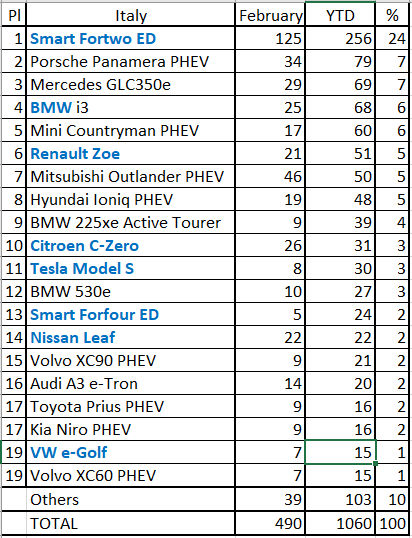