Austrian plug-in sales started the year growing a moderate 12%, to 741 units, but because the mainstream market is sliding like it was on a ski slope (-12% YoY), the PEV share jumped to a record 2.9% in January, opening bright perspectives for this year.
Looking at the models ranking, the BMW i3 jumped to the leadership, with the German hatchback profiting from the larger battery appeal to overcome everyone else.

The hot Hyundai Kona EV started the year in Second Place, with 84 deliveries, and promises to be a strong candidate for the 2019 title, unlike the 2018 winner, the VW e-Golf, that registered 71 units (down 38% YoY), earning the 3rd spot.

In the PHEV side, there were a number of great results, starting by the record 29 deliveries of the Mitsubishi Outlander PHEV, making it the category Best Seller, while both Land Rovers with names as long as their size also made personal bests, with the LR RR Sport delivering 28 units, while its LR RR posher sibling registered 12 units.

But there also good results on the German carmakers too, the BMW 225xe AT registered 17 units, its best result in 17 months, while the new Mercedes C300e/de twins had 16 sales, the plugin C-Class best result in 15 months.

Finally, the BMW i8 Sports Car delivered 11 units, its best result since January '15(!), allowing not only a Top 20 spot, but more significantly, the #2 position in the Sports Car category, only behind the Ford Mustang (13 units), tying with its more normal BMW relative, the BMW 8-Series.

In the manufacturers ranking, BMW is back in the lead, with 20% share, followed by Hyundai (16%), while last year winner Volkswagen (11%) is a distant Third, having to keep an eye on Renault and Nissan, both with 9% share. 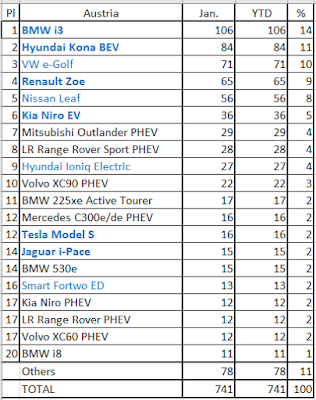