Looking at January Best Sellers, the Renault Zoe registrations uptick continues (+136% YoY!), with 1,496 units (#29 in the mainstream market), being the main reason for BEVs to shine, but it wasn't the only one, as the #3 Smart Fortwo ED tripled sales to 306 deliveries, while the #2 Nissan Leaf maintained its sustained growth, thanks to 341 units.

But the real events were the Kia Niro EV (149 units) and the Hyundai Kona EV (147) performances, winning a Top 10 spot, while the presence of both Hyundai Ioniq's (#15 & #17) and the Kia Niro PHEV (#18), underline the current deliveries push that the Korean Group is doing in Europe.

In a market known for its stability, this time there are some interesting surprises, besides the Korean rise, Jaguar-Land Rover had a great month, placing all three plugins in the Top 20, with the Land Rover Range Rover Sport PHEV, along with winning the title of longest model name, earning the #11 spot, followed but its posher sibling Range Rover PHEV (#12), while the fully electric Jaguar i-Pace joined the ranking, in #20.

Both Volvo SUVs scored record results, with the midsize XC60 PHEV registering 214 units, while the fullsize barge XC90 PHEV delivered 195 units, with both running with the Mitsubishi Outlander PHEV (214 units), for the Best Selling PHEV title. 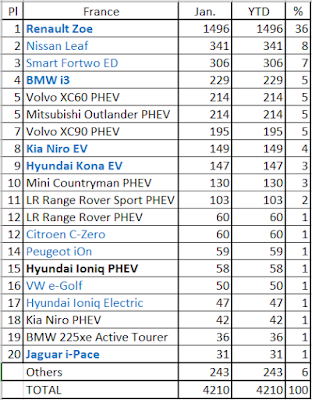