Looking at the 2018 sales by Automotive Group, we have: 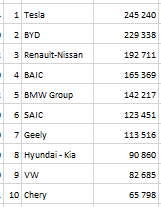 Regarding the remaining OEMs, there is one significant change, with Hyundai-Kia surpassing the almighty VW Group and reaching #8, which says a lot about what is happening right now...


Interestingly, half of the Top 10 belongs to Chinese OEMs, and if we add Tesla to the Disruptors team, Legacy OEMs are a minority in the Top 10. Is this a sign of the New World Order in the automotive industry?
Looking at last year standings, and comparing it with 2018, there are noticeable changes, Tesla jumped from #5 to the leadership, Renault-Nissan dropped from #1 to 3rd, Geely dropped two positions, to #6, SAIC was up two spots to #6, while the Volkswagen was down two spots, to #9.

Highlighting the changing times, we have two new Automotive Groups in the Top 10, with Hyundai-Kia jumping to #8, and Chery reaching #10, kicking out General Motors, now #11, and Toyota (down to #15!) out of the Top 10.

The Toyota case is particularly worrying, not only because it is one of the largest Automotive OEMs, and in this ranking is only #15, but also because in a fast growing market, it was one of the few (the only?) OEMs to lose sales (-10%) regarding 2017...

Looking only at BEVs, the ranking would be like this:

The disruption is even more visible here, with only Renault-Nissan on the Top 5, and Tesla winning even more easily.

So, BMW and the VW Group are still too PHEV-based to be considered one of the leading Legacy OEMs. Maybe things will look different in 2020?
Published by José Pontes at February 03, 2019