The European passenger plug-in market registered over 33,000 registrations in January, growing 28% regarding the same period last year, but don’t be fooled into thinking that it’s business as usual in Europe, because we are witnessing the fall from grace of PHEVs, which have been experiencing consecutive losses since the new WLTP-rules enforcement, while on the other hand, BEVs have been flourishing, in the first month of 2019 all-electrics jumped 67% YoY, to almost 21,000 deliveries, being now responsible for 62% of all PEV sales, leading to a record 1.7% EV share, and adding PHEVs to the tally, the share jumps to 2.8%, already above the 2.5% result of 2018.


And this is before the Tesla Model 3 tsunami…


The big news in the top positions is the Hyundai Kona EV jumping to #6, with a record 2,263 deliveries, no doubt proof of the popularity of the Korean crossover across the continent, now all Hyundai needs to is finding enough batteries to fulfill demand…

#1 Renault Zoe – The 3,340 deliveries in January signaled the return to the leadership of the French hatchback, with deliveries up 79% YoY, and now with no production constraints, one should see if the demand continues as strong for the current generation, one the much improved “new” is showed to the world in the Geneva Auto Show. As for market individual performances, the Zoe continues as popular as ever in its domestic market (1,496 units, +136% YoY), and there also were positive numbers in Germany (799 units), Sweden (239 units) and The Netherlands (237 deliveries, new record).

#2 Mitsubishi Outlander PHEV – Dependable and always fit for service, the Japanese SUV started this year race in 2nd, thanks to 2,983 registrations, with the Mitsubishi model continuing to be popular in Scandinavia (456 units in Sweden, 415 in Norway) and elsewhere, as the several three-digits performances (Germany, France, Spain, UK…) can attest. This is a popular nameplate, due to its mix of utility, space, decent electric range and (relative) affordability. On the long run, one wonders how much damage the recent BEV push will make, although, with no direct BEV competitor in sight, the Mitsubishi model can still rack up sales without major worries.

#3 Nissan Leaf – Europe’s 2018 Best Seller and the most common plug-in in the world started the year in 3rd, possibly giving the first signs that their audience is already waiting for the 62 kWh version, and considering that the new version will only be available across the Continent in in the beginning of the summer, Nissan will have to pull out some rabbits out of the hat (as in, nice discounts) to continue in a steady pace. Nevertheless, by registering 2,899 units in January, the Nissan hatchback showed that is can still move a significant level of stock, with the main markets being Norway (673 deliveries), France (341), and The Netherlands (396).

#4 BMW i3 – The German Stormtrooper Hatchback sales were up 33% in January, to a near-record 2,489 units, with the BMW pocket rocket benefitting from the age-old formula “bigger battery = bigger sales”. Looking at individual countries, Norway (619 units) and Germany (703) were the highlights, but France (229), The Netherlands (112) and Austria (106), were also significant markets for the BMW nameplate. Looking into 2019, expect deliveries to remain relatively stable in the coming months, as the Tesla Model 3 could steal some growth potential to it, but it won’t be enough to put its sales in the red.

#5 Volkswagen e-Golf – Remember the time when saying “e-Golf” was synonymous with “Norway”? Not anymore, despite Norway still being one of the largest markets (666 units), the German BEV deliveries are now more balanced, having registered 746 deliveries at home, with The Netherlands (653) also posting a big three digit-performance, so the 2,442 units registered in January were more evenly spread than in the past. It remains to be seen how the e-Golf will resist to the arrival of newer, more competitive models, while at the same time, it will have to deal with the Osborne effect of the much-hyped VW ID Neo /ID3 / whatever it will be called.

Looking elsewhere in the ranking, besides the #6 position of the hot Hyundai Kona EV, we should also mention the 68% sales jump of the #7 Volvo XC60 PHEV, to a record 1,615 units, while the Hyundai Ioniq Electric joined the Top 10, in #8, highlighting one if this year trends: The rise to power of the Korean models, as we now have 6 Koreans(!) in the Top 20, 3 from Hyundai and 3 from Kia.


Volvo has also reasons to smile about, not only the Volvo XC60 PHEV is beating records, but its larger sibling XC90 PHEV is also on the up, having delivered 878 units, its best result in 22 months, while the S/V90 PHEV twins jumped into the Top 20, in #19, making 3 Volvo’s in this ranking, which is especially surprising, when one thinks that the Swedish brand still hasn’t joined the now fashionable BEV-bandwagon…


In #20, we find the Audi e-Tron, that despite being still in demo-mode, it is already on the Best Sellers radar, giving reason to the big success expectations that the 10,000-plus waiting list of the Audi electric SUV is providing.


Looking at the manufacturers ranking there are some interesting duels, last year winner BMW (14%) is already in the lead, followed by Hyundai (12%), that came out of nowhere to #2, while Renault and Nissan are running for the last place in the podium, both with 10% share.


Just outside the medals, Mitsubishi and Volvo, both with 9%, are on the lookout for an opportunity to join the podium. 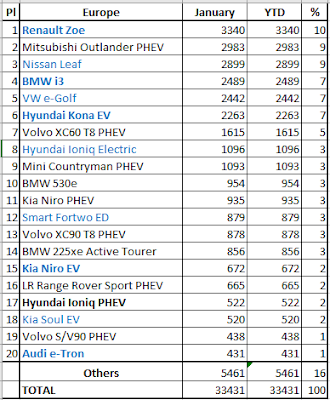