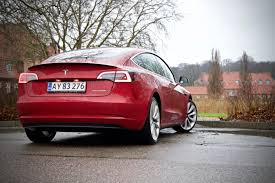 Regarding last year, BEVs recovered significant ground, now being responsible for 47% of plugin sales, much better than the 32% won last year.

This recent uptick in BEV sales is thanks to the addition of three new models, with the Tesla Model 3 jumping to 2nd place in the 2019 ranking, while being the Best Seller in March, whil the Hyundai Kona EV is #4, with 208 units, and the just-landed Kia Niro EV is now #6, with 119 deliveries.

Despite the Tesla Model 3 thundering arrival, the Kia Niro PHEV is still the leader in the YTD ranking, underlining the an interesting feature of this market, as 5 out of the Top 6 models come from Korea.

In the Manufacturers ranking, last year leader Kia continues to be the Best Selling brand (22%), with Tesla and Hyundai, both with 9% share, filling the remaining podium places. 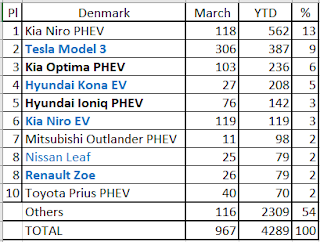 The answer is now being written, comparing the Model 3 with the competition, its 306 deliveries in March allowed it to beat every competitor in its category.

But looking at the total Q1 registrations, the Tesla Model 3 was 2nd, behind the VW Passat, in the future expect the Model 3 to jump ahead soon, although the new PHEV versions of the Volvo S/V60, VW Passat and BMW 3-Series could boost their sales and race the Californian for the leadership.