After a great start of the year, the German PEV passenger car market continued on the right track in March, up 42% to 9,677 registrations, with BEVs growing at a fast pace (+75% YoY), while PHEVs remain flast (+1%).

Looking at March Best Sellers, there was a Tesla Model 3 deliveries tsunami (where have i heard this one before?), with 2,224 units being registered, just the best score ever by a plugin in German territory, while the previous leader, the Renault Zoe, despite losing the top spot, is also reaching record results, having delivered 1,136 units last month.

In fact, the Tesla Model 3 arrival in Germany is following the trend that we are seeing elsewhere in Europe, instead of the Californian drying up sales of other EVs, like in the US, here it is helping other EVs to reach new heights, thanks to increasing the visibility of electric cars, as we can see with the #3 BMW i3 hitting a record 770 deliveries, or even the evergreen Mitsubishi Outlander PHEV selling 693 units, a new record for any PHEV.

So, in the same month, both the BEV and PHEV records were beaten. Nice!

But the surprise of the month came in #6, with the Audi e-Tron registering 478 units, with the German maker now fulfilling the long waiting list for its new BEV model. Will we see it often here? If they find enough batteries, i guess we will...

The German PEV market is known for close races and constant changes, and last month was no exception, first of all, the Tesla Model 3 jumped from 4th to the yearly leadership, while the Best Selling PHEV, the Mitsubishi Outlander PHEV, climbed to 4th, surpassing the VW e-Golf, that seems to be starting to be in sunset-mode.

Speaking about Volkswagen Group, the Audi e-Tron was up to #6, while the BMW 225xe A.Tourer is in recovery mode, jumping two spots, to #7.

Both the BMW Group and the Daimler Group had reasons to smile about, besides the aforementioned good results of the BMW i3 and 225xe A. Tourer, the BMW 530e climbed one spot to #11 and the Mini Countryman PHEV was up to #12, while we have one Mercedes nameplate joining the Top 20, with the Mercedes E300e/de PHEV jumping to #16, thanks to 225 deliveries, the taxi model best result in 14 months, while the Smart Fortwo EV climbed one place, to #9

Outside the Top 20, we should mention the record 106 deliveries of the Jaguar i-Pace and the surprising 130 registrations of the Porsche Panamera PHEV, with the German Sports Sedan now apparently recovered from the WLTP-trauma and back in the fast sales track. 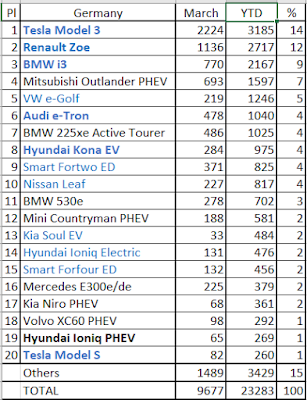 
The answer is now starting to be written, comparing the Model 3 deliveries against its midsize premium competitors, we can see that the local heroes are still significantly ahead, although the Audi A5 behind the Tesla.

Also interesting to see, is that it seems the BMW 3 & 4-Series are the models most affected by the current Model 3 fever, which could be explained by the type of drivers we are seeing in the current European Model 3's, as they are significantly younger than those of the Model S, and it's the kind of drivers we were used to see in brand new BMW M3 and M4's or high-end 3/4 Series, devouring kms at the hands of the Ultimate Driving Machine like if there was no tomorrow.

One thing is certain, BMW will have a hard time to regain these drivers, maybe not even a PHEV M3 & M4 will be enough…
Published by José Pontes at April 19, 2019