This good market performance was mainly due to the Tesla Model 3, that delivered 2,195 units in March, a new record for any Tesla in the Netherlands, also allowing the Tesla sedan to become last month Best Seller, all fuel categories included, with over 1,000 units of advantage over the #2 Ford Focus (1,187 units).


Surprisingly, the Mitsubishi Outlander PHEV was also 3rd, with 323 units, being by far the Best Selling PHEV in this market, with the Japanese SUV scoring its best result since December 2016, when it lost the company car fiscal benefits, so even without fiscal incentives, buyers (or should i say, fleet managers?) are back to Mitsubishi dealerships.

Outside the podium, the Nissan Leaf (288 registrations) keeps pumping out decent performances, even with the looming 62 kWh version just a few months away.

Will we see the Model 3 end the year in the mainstream podium?

The following positions remained mostly the same, with the only change being the BMW i3 surpassing its Renault Zoe rival, climbing to #7.

Outside the Top 10, the ranking is more dynamic, with the new generation Volvo V60 PHEV jumping six positions, to #12, with the 94 deliveries of March being the nameplate's best result since December 2016.

After the December deliveries tsunami (2,621 units, best result ever for a BEV), that allowed it to be the #2 last year, the Jaguar i-Pace is back at the ranking, in #19, thanks to 40 deliveries in March.

As for Luxury SUVs, the 2019 Best Seller is the Land Rover Range Rover PHEV, with 114 registrations, ahead of the Volvo XC90 PHEV (99 units), but last month the Audi e-Tron registered 40 units and became that month Best Seller, so it won't be a surprise that a few months from now we will see the German SUV not only in the Top 20, but maybe ahead of this category. For the ones asking about the Model X, news are not at all good, with only 22 units this first quarter, down 94% YoY, but more on this below.

Just outside the podium, Nissan (9%), Kia and Mitsubishi (both with 8%) are all looking for a chance to jump into a medal spot. 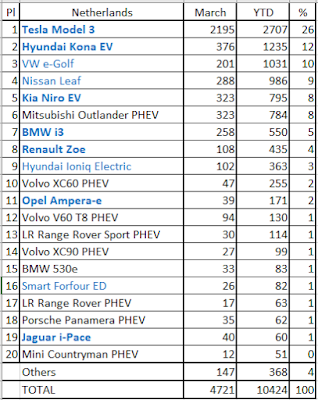 The answer is now starting to be written, comparing the first quarter Model 3 deliveries against its midsize premium competitors, we can see that it has managed to kick some Premium ass outrun all of them, although the ICE models behavior differs from one to another, while the Audi A4 registrations sank 47%, and the Mercedes and BMW nameplates stagnated (+2% and +5%, respectively), the Volvo S/V60 twins are up 76%, and its PHEV version is still in ramp up mode, representing just 9% of all sales.

Once the production of the Swede PHEV Wagon is in cruise mode, expect it to be responsible for at least some 20% of the model sales, helping it to run ahead of the Germans, although the revised BMW 330e, said to start selling in the Summer, could help the sports sedan to overcome the Volvo model, in the race for #2.

Large luxury cars, by fuel source
With the luxury EVs losing the generous fiscal incentives in January, sales were bound to tank this year, to the profit of ICE models and PHEVs.

And so it did, while a year ago, the Tesla Model S was in podium seats, disputing the leadership with the BMW 5-Series, sales (32 deliveries) are only a fraction of what they were last year.

Will the Model S recover? I guess we will only know, once the much-awaited refresh has landed.

Large luxury SUVs, by fuel source
With the luxury EVs losing the generous fiscal incentives in January, BEV sales were bound to tank this year, to the profit of ICE models and PHEVs.

And so it did, while a year ago, the Tesla Model X was dominating front and center this category, this time, with only 22 deliveries, it is far behind the front runners.

Unlike the car category, where ICE is still king, here on behemoth-land, plugin hybrids are having a relevant part, while the leader BMW X5 is all ICE (for now), the runner-up Range Rover Sport PHEV represents 88% of the nameplate sales, while the Volvo XC90 has its sales evenly distributed between the ICE version and the PHEV, and finally, the Range Rover has 76% of all its sales also coming from the PHEV version.

But one can always say that these nameplates weren't affected by the fiscal changes that happened at the end of the year, so it would be natural that they jumped ahead of the Model X.

But what about the 60 Jaguar i-Pace and 42 Audi e-Tron registered so far this year?

Both had the same fiscal cuts, and yet they are ahead of the Tesla Model X, despite the first being too expensive for what it is, while the second has a poor efficiency, when it comes to range.

I think this is just one symptom of a larger trend regarding the Model S and X, that the Tesla Q1 2019 sales report shed some light on it, while the Model 3 part wasn't surprising, with deliveries up YoY, the fact that the Model S/X were down over 50% is worrying and it is also proof that Tesla demand is finite, after all.

There are several reasons to explain this:

- First, there are fiscal issues (both models lost benefits in the US and NL);

- Second, there is the long rumoured Q2/Q3 '19 refresh of both nameplates;

- Third, is the fact that Tesla now has competition, something it lacked for several years, and although they are not (yet) at their level, spec-wise, they are good/different enough for many to prefer one of the just landed BEVs, or wait for those that are about arrive, like the much antecipated Porsche Taycan;

- The fourth reason is specific to the Model S and is called cannibalization, by its slightly smaller, younger and much cheaper Model 3 sibling, that has almost the same range and can charge at a higher rate, being also the ultimate "hot EV" nowadays.

And one final note on the future plans of the Model S, there have been rumours on pulling the Model S upmarket.

I believe it is a mistake, not only because the Mercedes S-Class type of customer would be less inclined to buy a Tesla, but also because it is a limited market (+/- 80,000 units/year for the S-Class), while the lower class has a lot more more room to grow.

With the current Model S sitting somewhere in no man's land, between the E-and-F segments, a bit like the Audi A7, it would be wise for Tesla to go down a little and face the Mercedes E-Class and BMW 5-Series face to face, like the Model 3 is doing in its own category.

But for that, Tesla would need to launch a competitive Standard version of the Model S, with some 300 miles range and selling for about 70-75,000 euro.

Impossible? Would ruin those models profitability? I have no idea, but one thing i do know: Tesla Model S/X demand limits are now being discovered, and the maker has to decide what it wants to be, either a niche maker, like Porsche, and have high margins in their vehicles, or going after BMW and Mercedes, at the cost of (some) profitability.