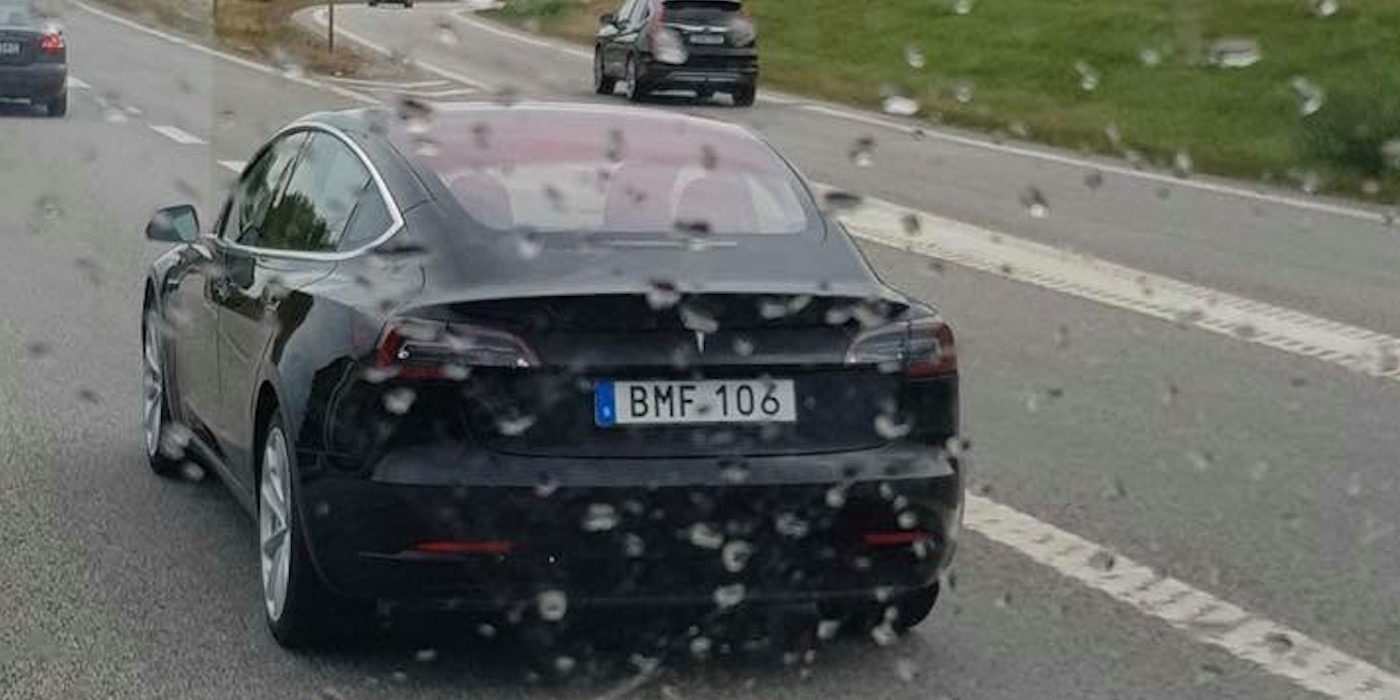 Meanwhile, the mainstream market continues sliding, dropping 19% last month, with the WLTP blues seemingly to have no end in sight.

Right now buyers are running away from fossil-fueled vehicles, with diesels dropping to 35% share last month (-31% YoY), and even HEVs are suffering (-22% YoY), with a stampede-like movement into plugins, and BEVs in particular (in March they were up 183%), but because BEVs are still model/production constrained, it seems many people prefer to buy a PHEV, or wait in line for a BEV, than to buy/lease another ICE-based vehicle.

Looking at last month Best Sellers, it was the expected Tesla Model 3 delivery tsunami, and although it wasn't enough to beat the all-time monthly record (1.249 units by the Outlander PHEV, back in December 2015), it was only the second time ever that a single plugin sold more than 1.000 units in one month.

Speaking of the Mitsubishi SUV, the nameplate is experiencing something of a renaissance in Sweden, registering 642 units, its best result since the aforementioned record result, in December 2015.

The Kia Optima PHEV, was 3rd, with 383 units, its best result this year, with the Korean midsizer seemingly not being impacted by the arrival of the Model 3. Of course, it helps that both are still in different price levels and the Kia is offered in the all important station wagon body...

But the real surprise came in #4, with the Kia Niro EV scoring a record 296 deliveries, allowing it to rise on position in the 2019 ranking, to #7.

Other Korean models are also on the rise, with the Kia Optima PHEV jumping two spots, to 4th, and the Hyundai Kona EV climbing one position, to #14, a much slower delivery ramp up than its Kia relative, the Niro EV.

In the top spots, the Tesla Model 3 shooted to 2nd place, only behind the leader Mitsubishi Outlander PHEV, itself scoring strong results lately, so it will be interesting to see how long will the Japanese SUV resist the rise of the Silicon Valley EV. Bring on the popcorn, as this could be interesting.

Outside the Top 20, we should mention the 47 registrations of the Audi e-Tron, that should show up on the Top 20 soon, as it ramps up production, making it the strongest candidate for the Luxury SUV title.
In the manufacturers ranking, Kia is in the lead, with 25% share, now followed by Mitsubishi (16%, down 1%) and Tesla (13%), while Volvo stumbled (11%, down 7%), from Second Place, to outside the podium. 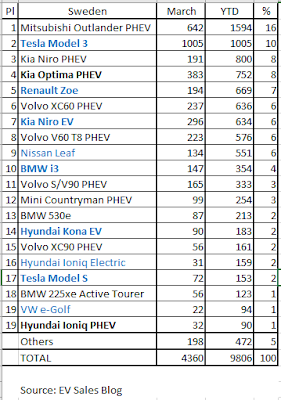 Besides winning the monthly Best Selling PEV title in March, the Tesla Model 3 also made an instant impact in its midsize car category, only losing to the Volvo S/V60 series (quite naturally, i would say, i mean, its a Volvo...in Sweden), but staying well ahead of the VW Passat and the Kia Optima, with this last model also profiting from its plugin version (93% of all Optima sales) to have an unthinkable otherwise success in this market.

In #5 we have the first representative of the Three Marys, with the Mercedes C-Class showing up, with 407 registrations, or 41% of the Model 3 deliveries, with the three-pointes-star model appearing to be the one less affected by the Model 3 arrival, a trend that has been repeating in other markets where the Californian has landed.

A bit off-topic, but the 3rd best selling full-size car, the BMW 5-Series, registered 362 units, last month, so this is one of those markets where the Model S numbers can grow significantly, once a refresh is made to it.
Published by José Pontes at April 02, 2019