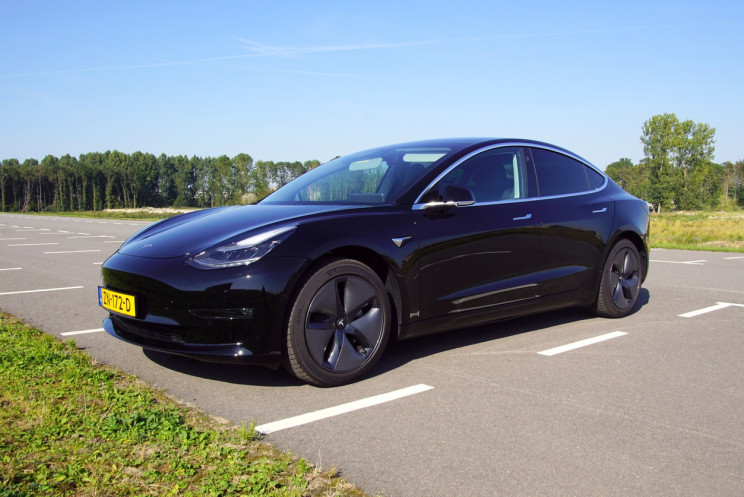 December had an amazing 22,983 plugin registrations, a three-fold increase regarding the same month last year, finally beating one of the oldest records in modern EV history, the 15,879 units of December 2016.

This historic result translated into a Norway-like 54% PEV share last month, pulling the 2019 plugin share to 15% (6% in 2018), an awesome result that places this market with the 3rd highest plugin share in the world, only behind Norway and Iceland, but this share gains even another dimension when we realise that BEVs represented 93% of registrations in 2019, and 99%(!) in December alone.

Of course, the higher taxation of BEVs in 2020 is the major reason for this disruption, but after the usual sales hangover in Q1 2020, something this market is used to, expect things to pick up again around Q2/Q3, ending 2020 with another great result, pulling the plugin share well above the 20% mark.

Back to December, this great market performance was the result of a perfect storm of peak results (of the 15 BEV models in the Top 20, 11 had record scores, and 3 did Year Best results), but the main reason for this historic result is the exceptional performance of the Tesla Model 3, that delivered 12,053 units in December alone, which is not only the midsizer best result outside its domestic market, but also a new monthly all-time best for the Dutch market, all models included.

Needless to say, the Model 3 was by far December's best selling nameplate in the overall market, but what is truly amazing, is that last month, the top 6 best selling models were all BEV! How long will it take for the yearly ranking to look like this?

Besides the aforementioned Tesla Model 3 win, in December the runner-up spot went to the Audi e-Tron, with 3,054 units, where the recently launched "50" version represented the majority of sales, the Nissan Leaf reached the last place of the podium, with 1,075 units, while its French cousin, the heavily revised Renault Zoe, ended the month in 4th, with 1,020 units.

Finally, SAIC's MG ZS EV jumped to 5th in December, with 967 registrations, by far the best result ever by a Chinese plugin outside their home market, and after a three-digit performance in the UK in November, the MG model is the first Chinese EV to be delivered in significant amounts in mainland Europe. A sign of things to come?

Looking at the 2019 ranking, the two major news are the 45%(!) share of the leader Tesla Model 3, not only became the #1 Best Seller among plugins, but also overall, and with a score (29,922) that was the largest annual volume since the 31,641 units of the Opel Astra, way back in 2000. December's Climber of the Month was the Audi e-Tron, that jumped 7 positions, straight into the 3rd spot, removing the Nissan Leaf from the podium and preventing the Japanese hatchback from repeating the previous year Bronze Medal.

Other last minute changes were the Renault Zoe climbing to #8, repeating its positioning in the 2018 ranking, the MG ZS EV joined the ranking in the last month of the year, ending 2019 in #11, while the Jaguar i-Pace climbed two spots, to #13, while the most expensive Teslas also took the opportunity to climb some positions, with the Model S jumping 3 positions, to #14, and the Model X was up to #16.

These last three models were the highlights of the previous sales peak, that happened a year ago, when expensive BEVs lost a large chunk of company car incentives, now their numbers were a fraction of last year, but still, there are differences, with the i-Pace retaining 22% of last year sales, the Model X got 16% of the 2018 score, while the Model S was the one that fared worse, having just 9% of last year sales...Ouch.

On the other hand, the Hyundai Kona EV had a great year, jumping from the 11th spot of 2018 straight into Second Place, with 5,526 units, that could have been even more, had Hyundai managed to get more batteries...Better luck in 2020?

In fact, despite the lack of incentives, the plugin hybrid category is growing organically, with the 2019 score of 4,931 units being its best year since 2016, when they lost access to incentives, and it wasn't only the Outlander PHEV contributing to this growth, as the #19 BMW 530e grew 53% YoY, the #18 Volvo XC90 PHEV saw its sales jump 163% YoY, to 337 units, its best year since 2016, or the new Volvo S/V60 PHEV registered 462 units, the best result in 4 years for the Swedish midsizer.

So yes, there is a place for plugin hybrids in the market, even without access to incentives. Having said that, expect the BEV rise to continue in 2020, with possibly only the Mitsubishi SUV resisting to the blue wave in the Top 20.

In the manufacturers ranking, Tesla (47%, up 4%) won its 3rd consecutive title, with Hyundai (10%, down 4%) winning the Silver medal and Audi stealing the Bronze Medal in the last minute, overrunning Kia, that dropped to 4th.

Finally, a preview of the 2020 Best Seller race. How will it go? Despite the Tesla Model 3 and Audi e-Tron continuing to be hot sellers, with 45,000€-plus EVs losing part of their fiscal incentives, expect smaller sized BEVs to gain significant ground, like the Renault Zoe or the  BMW i3. Should Hyundai get more batteries this year, the Kona EV could have a shot at keeping its Silver Medal, and the same can be said about Kia and its #5 Niro EV.

With the aging VW e-Golf and Nissan Leaf being unable to improve on their 2019 result, and the Opel Ampera-e expected to be euthanized by PSA during the year, the MG ZS EV and the long list of pure electric models (VW ID.3, Peugeot 208/2008 EV, Opel Corsa EV...)  set to land this year will have lots of vacant places to fill in 2020. 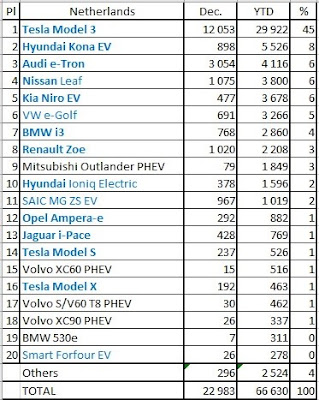 Well, it's not only by far the Best Selling Plugin in the country, but also in the overall market, where the Tesla midsizer more than doubled the result of the #2 VW Polo.

Midsize Car Best Sellers
The Tesla Model 3 is the undisputed leader in the midsize car segment, with the recently electrified BMW 3-Series (4% of sales belonged to the PHEV version) in Second, but far, far, FAR, behind.

The Volvo twins S/V60 are in 3rd, with 11% of sales belonging to their PHEV versions, which in isolation doesn't sound great, until you see the others...

Outside the podium, we have the unplugged Mercedes C-Class and Audi A4 outside the podium,  and while Mercedes doesn't seem interested in launching their PHEV versions here, that could soon change if the upcoming PHEV midsizers (VW Passat GTE, Skoda Superb PHEV, Peugeot 508 PHEV...) start to gain traction. I wouln't be surprised if sometime in the first half of next year, all of the Top 5 became electrified.
Midsize SUV Best Sellers
This SUV category is being quickly electrified, although we still have two unplugged models, the Mercedes GLC and the BMW X3, the Mitsubishi Outlander PHEV (96% of all Outlander registrations) was the Best Seller of the category, with the electrified Volvo XC60 (30% of sales belonged to the PHEV version) in 2nd, with 1,697 units, and the fully electric Jaguar i-Pace closed the Top 5 with 769 units.
With the BMW X3 PHEV said to land soon, and the VW ID.4x, among others, landing throughout the year, we should see a fully electrified Top 5 sometime next year.

The Porsche Taycan  will be a welcome addition to this category...
Full size SUV Best Sellers
The full size SUV category seems to be the most advanced segment when it comes to electrification, not only we have 2 BEV nameplates in the top 5 positions and a fully electrified Top 5, but the #4 Volvo XC90 already has 59% of its registrations coming from its PHEV version.

Add this to the fact that the #5 BMW X5 is ramping up production of its interesting PHEV version, and the electrification rate should only go higher. And don't forget the incoming Mercedes GLE PHEV, with 100 kms electric range and fast charging is also coming soon!