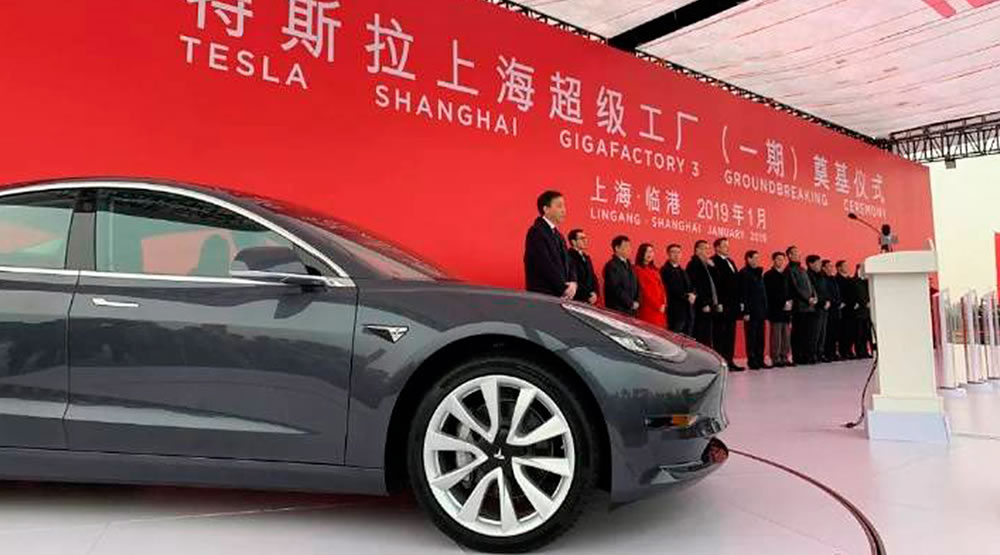 With the Chinese market slowly returning to normal, now that China has endured the first wave of the COVID pandemic, sales started to recover from February’s fall into the abyss, by dropping just 51%, to close to 60,000 units, a significant improvement from the 65% fall of the previous month.


It is expected that this recovery will develop in the coming months, with the second half of the year probably seeing positive months, and maybe by the end of 2020, we could see this market back in black.


One positive sign is that BEVs are resisting better, with all-electric models dropping 49% vs 58% for PHEVs, leading BEVs to have 84% of plugin sales last month, in line with the 86% of last December, and pulling its 2020 share to 79%, so the “Go BEV, or Go Home” mantra continues.


Looking at March Best Sellers, the production ramp up is visible, with the 5-digit performance of the Tesla Model 3 leading the surge, but the remaining Top 5 models have also seen Personal or Year Best performances last month.


The poster child for electric mobility hit 11,280 units (including imports), winning its third monthly Best Sellers title in a row, winning its first 5-digit performance in China. While the absolute record is still far - 21,963 units - BAIC’s December record could become in danger by the sporty silhouette of the Model 3 sometime this year.


The maker’s reply to the GAC Aion S and BAIC EU-Series has repeated February’s 2nd place last month, thanks to 5,271 units, a new record for the fully electric sedan, so it seems BYD is betting in it to ramp up and stay among the Best Sellers, if production capacity is not a problem, demand might be, after all, the GAC Aion S is cheaper AND has better specs (59 kWh battery and 510 NEDC electric range for the Aion, 53kWh and 421 kms for the Qin).


GAC’s sleek sedan this time was left out of the podium, having registered 2,957 units, a new year best, but that nevertheless was insufficient to win a medal, as local Big Boys (BYD and BAIC) have started to ramp up production more swiftly. One of the most competitive domestic EV’s on the market, the Aion S is sure to continue a regular in this Top 5, growing with the remaining market.


The production of the compact crossover has been ramping up, and although its career in its domestic market has been discreet so far, with the random Top 5 presence, overseas it is a whole different story, being by far the Best Selling Chinese EV in foreign markets, providing relevant volumes in a number of European markets, but also leading the EV Revolution in a number of countries, like Israel, India, Chile or Thailand. But back to China, last month it reached a Year Best 2,531 units, allowing it to achieve its first monthly Top 5 spot in 2020. While the MG model has a middle of the road specs (45 kWh battery, 262 kms / 163 mi WLTP range, 110 kW motor), it compensates with a spacious and well apointed interior. On a final note, the secret of the success of the Sino-British EV in export markets, regarding other Chinese OEM efforts, is that it benefits from a (somewhat) familiar brand (MG), that is associated to British-ness, even if in practice the Anglo-Saxon genes of the eZS are minimal, but above all, it sits in a relatively untapped end of the market (electric compact crossovers), that in the overall market is growing fast globally.


Looking at the 2020 ranking, there were some significant changes, if the Tesla Model 3 cemented its leadership, below it we have two new podium bearers, with the both the BYD Qin Pro EV and BAIC EU-Series jumping 3 positions to Second and Third place, respectively.


Just outside the table also we have the #21 BYD Song Pro EV, that scored a record 1,003 units last month, and is now only 31 units behind its stablemate #20 BYD Tang PHEV. And the good news for the Shenzhen maker didn’t ended there, as BYD also saw its small Crossover Yuan EV climb 4 positions, to #8, thanks to 2,009 units, its best result in 7 months, while the e2 hatchback (1,215 units, year best) climbed to #15, helping the Shenzhen maker to keep its leading position on the market.


Looking at the manufacturers ranking, the current disruption is being felt, if BYD (17%, up 2%) is keeping the leadership, below it there are seismic changes, with Tesla (14%, up 5%) jumping to the runner up spot, while SAIC (12%, down 2%) dropped to 3rd, with GAC and BAIC outside the podium, both with 8% share.


Another sign of the current disruption is that Geely, the #4 brand in 2019 and the largest Chinese maker in the overall market, this year has dropped sharply, having just 3% share, suffering from the PHEV fall from grace (10 out of its 12 plugin models are PHEV), while its Geometry A, set to be Geely’s take on the Tesla Model 3 recipe, is languishing in anonymity, more than 600 units below the Top 20 and selling 6 times less than the GAC Aion S.


Hell, even the startup NIO is outselling Geely plugins… 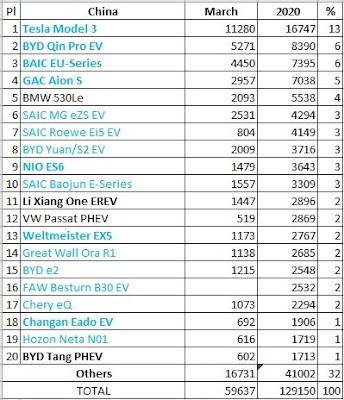