Despite the Covid-related lockdown in the second half of the month, the German plugin market score signaled another record performance in March, its third in a row(!), having registered 19,145 units, and with the overall market dropping 38% YoY, last month plugin share reached a record 8.9% (4.8% BEV), pulling the yearly tally to an amazing 7.3% (3.7% BEV), and to think in the end of 2019, i was forecasting 6% share for 2020...

March had a (not so) surprising leader, with the Tesla Model 3 winning its first Monthly Best Seller title since last September, thanks to 2,034 deliveries, its best performance in a year, while Volkswagen continues milking its e-Golf hatchback to the last drop, thanks to generous discounts, the German EV was #2, with 1,524 units, its third(!) record performance in a row, so it seems the veteran model is set to end its career on a high note.

But the Volkswagen didn't stopped there, with the Passat GTE ending the month in 4th, with 872 units, its best score ever.

Another surprise was the Audi e-Tron showing up in #5, thanks to a record 721 units.

So, 3 models out of 5 for the Volkswagen Group, with three record performances to boot. And the #6 (Audi A3 PHEV) and #7 (VW e-Up!) spots went also to VAG models.

How do you say "Counter-Strike" in German?

Regarding the 2020 table, the two front runners switched positions, with the VW e-Golf rising to #1, while the Tesla Model 3 jumped from #12 to 3rd, but it is still over a thousand units behind the top two, so it will be hard for it to recover ground, although being Tesla, you never know...

With the evergreen VW e-Golf seeing its career being extended almost until the end of the year, and the expected general slowdown in the coming months, the 2020 race should be a four horse race, with the VW e-Golf hoping to keep demand/momentum until the end of the year, the Renault Zoe betting in consistent performances to win the title "à la Alain Prost", the "Ayrton Senna" Tesla Model 3 hopes to pull some surprising performances to stun the competition, while a certain "young Schumacher" VW ID.3 expects to overcome mechanical software problems and recover enough positions to win the 2020 title in the last stages of the championship year.

Well, the production ramp up of the ID.3 is indeed happening, as the much antecipated hatchback crossed north of the monthly 100 registrations in March.

For now, the Volkswagen Group doesn't need it to grow, as the remaining lineup is running strong, besides the aforementioned three record performances (VW e-Golf, VW Passat GTE and Audi e-Tron), the Audi A3 PHEV did a Rudi Völler and found a second youth in the last stages of its career, despite the wrinkles and grey hair, the premium hatchback scored a record result last month, with 687 units, six years after it landed.

If the Volkswagen Group can do all this with a bunch of oldtimers (e-Golf, A3 PHEV, e-Up!), imagine what they will do with new, competitive models!

But the Volkswagen Group didn't have the exclusive of good performances in his Top 20, with the Smart Fortwo EV returning to the table, in #16, thanks to 501 registrations, a new year best.

Outside the Top 20, there's plenty to talk about, like the BMW X3 PHEV (256 units) and X1 PHEV (102) ramping up production, the new Opel Corsa registering 622 units, a strong first sales month for the Opel hatchback, so we should see it here soon, while Volvo continues to increase its electrification efforts, with its S/60 PHEV twins scoring 407 units, their second record performance in a row, and the XC40 compact SUV also scoring a best ever 184 units result.

The Mercedes A250e is another model to be seen soon on the Top 20,  with the compact model registering 421 units last month, while the Mini Cooper EV registered 326 units in March, confirming its popularity across Europe. 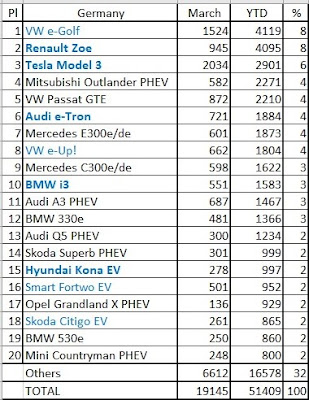 Looking at the 2020 sales, we have four models with a significant degree of electrification, with the leader VW Passat having 14% of its sales coming from the GTE version, while the #4 Mercedes C-Class has 16% of sales coming from its PHEV versions, and the #2 BMW 3-Series, 10% share.

But the champion of electrification is the #5 Skoda Superb, with 24% share.

Which leaves the Audi A4 as the only unplugged model.


We have a fully electrified Top 5, although these models have various degrees of electrification, from the 3% PHEV share of the Mercedes GLC, to the 73% of the Mitsubishi Outlander, passing by the 8% of the BMW X3, 14% of the Volvo XC60 and the 25% of the Audi Q5.

Anyway, 5 electrified models out of 5 is already something, and with the Mercedes GLC PHEV and BMW X3 in ramp up mode, things will look even better in a few months.
Full Size Car Best Sellers

With the exception of the #2 Audi A6, that still has its PHEV in demonstration mode, all other models have volume deliveries of their PHEV versions, with the #1 Mercedes E-Class hitting a significant 22% share, while the #3 BMW 5-Series reached 12%, and the #4 Volvo S/V90 twins had 20%.

With the Audi A6 PHEV said to ramp up production in the coming months, expect this Top 5 to be fully electrified soon.

Finally, the flagship BMW 7-Series had 24% of its sales coming from its PHEV version, while the Porsche Taycan is some 200 units below it, so we should see Porsche's sports sedan here sometime in the future, as the maker ramps up production.

Unlike other categories, the full size SUV isn't on the forefront of electrification, with two models still very much ICE only, as the leader Mercedes GLE had just 1% of its sales coming from the PHEV version (for some reason Mercedes Germany is not betting in the 350de version), while the #3 VW Touareg (1% PHEV sales) just now presented officially its plugin hybrid version.

The #5 Audi Q7 has also a low PHEV share, with just 8%, while the BMW X5 PHEV is way better, representing 19% of the X5 sales, adding to the full EV #4 Audi e-Tron, as the brightspots of the category.

With the new VW Touareg PHEV and (hopefully) the Mercedes GLE350de ramping up production, it should be a matter of time until this Top 5 becomes fully electrified.