With the overall French market crumbling (-72%!) due to the Coronavírus lockdown, returning to registrations levels (62,668 units) not seen in the past 50 years, one would think that plugins would suffer too, right?

The answer to that is Yes and No...

And No, because when the overall market falls off a cliff, like last month, having any kind of growth rate is positive, let alone with an immense 19% growth...


Funny enough, both powertrains had the same behaviour, with BEVs and PHEVs growing 19% each.

Looking at last month Best Sellers, the French Fest continues, with 4 domestic models in the Top 5, with the leader Renault Zoe delivering just 1,744 units in March, possibly definetely harmed by the lockdown measures.

The Tesla Model 3 was last month runner-up and the only foreigner in this Top 5, with 1,385 deliveries, which is the best score ever by a foreign plugin in French lands.

Why is this important? In this domestic-made friendly market, being the Best Foreigner while at the same time running with the best of the locals is a big deal, in the US, it would be like if say, the Nissan Leaf all of the sudden scored 7,000 units in one month, beating the Chevy Bolt and running at the same pace as the Tesla Model 3...

The remaining top positions went to PSA models, but the most surprising result shows up just behind the Top 5, with the Mini Cooper Electric scoring 179 units in its first full sales month!

Pent up demand, or is the British hot hatch going to become a force to be reckoned with?

Looking at the 2020 ranking, the big news is the Tesla Model 3 jumping to 3rd, confirming its Best Selling Foreigner status, while the DS 7 PHEV surpassed its Peugeot 3008 PHEV cousin, now being the new Best Selling PHEV in France.

The second half of the table has also seen some action, with the BMW i3 rising to #14, which is still far from the 5th spot that the German EV had in 2019.

The same can be said of the #16 Mini Countryman PHEV and #17 Mitsubishi Outlander PHEV, despite climbing one position last month, both are still far from last year performance, when they ended in #6 and #4 respectively, being last year Best Selling Plugin Hybrids...

Expect more changes to happen soon, as there is plenty of activity below the Top 20, like the thundering start of the Mini Cooper EV, with 179 units last month, being now only 39 units behind the #20 Range Rover Sport PHEV, while the VW e-Up (116 units in March, new record), is also getting ready to joint the table, as it is just 34 units behind the Top 20.

Another model that should join the table soon is the Citroen C5 Aircross PHEV, with the PSA crossover registering its first 49 units in March, while the big Teslas also had a positive month in March, with the Model S delivering 111 units and the Model X registering 84 units last month, their best month since 2018. 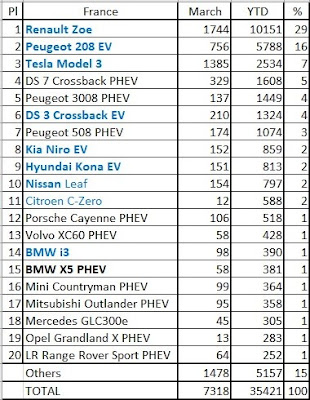