While the Netherlands does not have yet a full lockdown, the Coronavírus pandemic has forced a wide range of businesses to shutdown, slowing down business significantly, so expect slow sales months at least in April and May...In the overall market, that is.

This good market performance was in big part thanks to the Tesla Model 3, that delivered 1,339 units in March, allowing the Tesla sedan to become last month Best Seller in the overall market, with over 400 units of advantage over the #2 Kia Niro (925 units). It is the 6th time that the Tesla midsizer wins the overall Best Selling trophy, since it landed, little more than a year ago.

Another (relatively) recent, long range BEVs, reached the podium, with the Kia Niro EV (525 units) scoring its second record performance in a row, so it seems the Korean maker has enough batteries to ramp up production of its popular EV.


Surprisingly, the Volvo XC40 PHEV ended the month in 5th, with a record 237 units, being once again the Best Selling PHEV in this market, with the Swedish SUV proving its popularity in the Netherlands, which is a promising sign for the future XC40 BEV.

Just outside this Top 5, the Skoda Citigo EV registed 229 units, a new record, but if we add all 3 Bratislava triplets (Skoda Citigo EV, Seat e-Mii and VW e-Up!), we get 349 units, which would place it in 4th, an impressive performance for a city EV.


Looking at the 2020 ranking, we have a new leader, with the Tesla Model 3 jumping to Numero Uno, leaving the previous leader Opel Ampera-e 347 units behind, with the last place in the podium being disputed by the #3 VW e-Golf and #4 Kia Niro EV, both separated by just 16 units.

The Mitsubishi Outlander PHEV has regained the lead in the plugin hybrid category, but it might not be for long, as the rising Volvo XC40 PHEV is just 66 units behind, so the young Swede might surpass the Japanese SUV soon.

Outside the Top 10, the ranking also had plenty of changes, with the Renault Zoe climbing to #11, thanks to 86 units, a new year best, while its cousin Nissan Leaf jumped 5 spots, to #12, thanks to 125 registrations, also a year best, but the most impressive performance in the lower half of the table was the Mini Cooper SE joining the ranking in #13, thanks to 215 deliveries in its full sales month, the British hot hatch is sure to join the Top 10 soon, dribbling on the way its opponents, like Liverpool's winger, Mohamed Salah.

After a loooong production hell ramp up, the Mercedes EQC has finally reached the Top 20, while outside the table, the main news was the landing of the Ford Kuga PHEV (aka Ford Escape in North America), with 81 registrations, a strong start that could mean a Top 20 spot soon, with the American maker paving the way for its true EV champion, the Mustang E.

In the manufacturers ranking, Tesla is the new leader (13%), followed by Volkswagen and Kia, both with 11% share, and running for Silver.

Just outside the podium, we have the previous leader Opel (10%), while Volvo (9%) follows right behind. 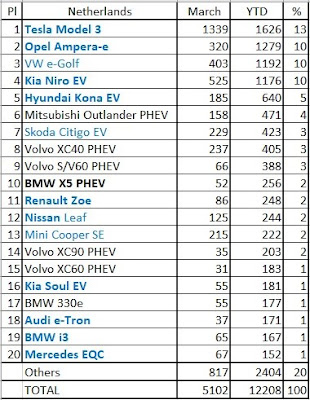 As for the remaining Top 5, the local Mercedes importer only last month started to deliver the C300e/de PHEV versions, so there is hope for it, something that can't be said about the 100% unplugged Audi A4...

Diversity is the word here, from the all-electric Mercedes EQC, to the almost all-PHEV Mitsubishi Outlander (94% PHEV units), passing by the mildly pluggable Volvo XC60 (33% PHEV) or the BMW X3 (14%), and ending on the unplugged Mercedes GLC.

While the Volvo XC60 and BMW X3 should continue see its plugin share increase over the next few months, Mercedes is now possibly more interested in betting on the EQC to replace its ICE GLC midsize SUV.

The leadership is in the hands of the BMW 5-Series, that has a low plugin share of its sales, at only 14%.

But there are other models in worse shape, the Mercedes E-Class has only 6% of its sales coming from its PHEV versions, the S/V90 PHEVs have only 5% share of the big Swedes sales, while the Audi A6 has yet to receive its PHEV units.

The only good news are the 62% PHEV share of the #5 BMW 7-Series, but there could be more good news soon, the Porsche Taycan is still in ramp-up mode, but has already registered 61 units, beating the Tesla Model S (43 units), so we might see it here soon.

Unlike the full size car category, where ICE is still king, here on behemoth-land, electrification is more advanced, while the leader BMW X5 has 60% of its sales coming from its PHEV version, the #3 Volvo XC90 represents 86% of the nameplate sales, while the Range Rover Sport has 87% of all its sales also coming from the PHEV version.

The all electric Audi e-Tron is 4th, while the Porsche Cayenne is the only model (for now) with most of its sales coming from the plugless versions (only 10% of sales come from the PHEV versions).