BEVs up, PHEVs down

After a slip in September (-12% YoY), the German PEV passenger car market returned the growth path, growing 6% last month, to 5,292 registrations, mostly thanks to BEVs (+56%), while PHEVs stumbled 30% YoY, no doubt due to the Summer pre-WLTP sales rush, allowing full electrics to outsell plugin hybrids (62% share for BEVs in October), frankly above the 2018 share (50% each).

The Renault Zoe was Second, thanks to 609 deliveries, its best result in 16 months, while the BMW 225xe AT, the only PHEV on the Top 5, was Third, with 504 registrations.

But the surprise of the month was the Smart ForTwo ED, that with 402 deliveries (best result in 7 months), was #5 last month. Will we see it here more often?

Over the years, the German PEV market became known for its changes and surprises, and October was no exception, the main news were the sudden registrations peak of the VW e-Golf, that nearly doubled its deliveries regarding September, and allowed it to surpass the BMW i3,, reaching the Second Spot, just 13 units behind the leader Renault Zoe.

It will be a close race for the leadership, as all top three models are said to have increased the production output recently, although if i had to bet, i would go for the e-Golf as the 2018 Best Seller, which would be a first for Volkswagen, as so far the best results it had was two Third Places, one in 2014, with the VW e-Up!, and the second in 2015, with the VW Golf GTE.

In a month where BEVs were on the rise, we should mention the Smart ForFour ED rising to #7, making 6 BEVs on the top 7 positions, while the Nissan Leaf jumped to #10, thanks to 306 deliveries, the nameplate best result since March, with the Japanese hatchback being the 7th BEV on the Top 10.

Other changes were the Mitsubishi Outlander PHEV jumping three positions, to #13, while the BMW 530e was up one position, to #16, and with the Mercedes E350e only 278 units ahead, the BMW PHEV still has a shot at ending the year as the Best Selling Luxury plugin.

The Hyundai Ioniq Electric rose to #18, thanks to a record 257 registrations, underlining the good moment pure electrics.

Outside the Top 20, the Hyundai Kona BEV delivered 78 units, which isn't a lot, but with the Korean carmaker said to have finally solved the battery constraints, expect it to be a familiar face next year. 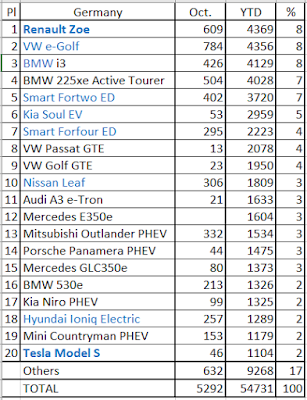