The French PEV passenger car market registered 5,644 registrations in December (+18% YoY), a new all time record, and the result could have been higher, if it weren't the dysmal results of PHEVs, that were down 21%, their sharpest drop since 2016, while all-electric models grew 37% in the same period, helping them to reach a record share of 2.7% in December (3.4%, if we include PHEVs).

This recent sales pick up, pulled the 2018 PEV share North of 2%, ending at record 2.1%, with BEVs alone having 1.7% share. Nevertheless it is a disappointing result, considering  the high level of subsidies associated and the fact that the PEV share only improved 0.4% regarding the 2017 result (1.7%). Better luck in 2019?

More telling of the changing times is the diesel fall from grace in the mainstream market, with the 2018 share shrinking to 39% (35% last November), a significant departure from the 47% of 2017 and a far cry from the 73% of 2012...Will diesel sales be dead by 2023 in one of the most diesel-addicted markets?

Looking at December Best Sellers, the larger amount of available batteries is allowing the Renault Zoe to reach new heights, registering a record 2,558 units in December (+55% YoY), pulling it to #16 in the mainstream market, its highest standing so far, selling at the same level as the Renault Scénic, with the Zoe selling on a 1-to-4 ratio regarding the market leader, the Renault Clio, its ICE sibling.

But the real event happened in the Third Spot, with the Smart Fortwo ED scoring a record 339 deliveries, while in #6 we have a fresh face, with the Kia Niro EV, aka e-Niro, delivering 175 units in its first full month on the market, a strong beggining that might indicate the Korean Crossover is set for a Top 5 spot in 2019.

The same can be said about the Hyundai Kona EV, that is  (slowly) ramping up its deliveries, having registered 146 units in December. Will we have two Koreans on the 2019 Top 5? More on that later...

In a market known for its stability, it is no surprise to find that the Renault Zoe won the Models trophy, its 6th in a row, with a record 17,038 units, a 12% improvement over the 2017 result, while the Nissan Leaf took another runner-up place, with 4.668 units, almost doubling last year result.

The 2018 Bronze Medal went for the BMW i3, with 2.415 units (+24%), while the year biggest surprise was the Volvo XC60 PHEV, coming out of of the blue to the 4th position, winning the 2018 Best Selling PHEV title, after a close race with the Mini Countryman PHEV and Mitsubishi Outlander PHEV.

Looking at the second half of the table, we can see two (mostly) intersecting trends, with BEVs and the Koreans rising in December, the Tesla Model S profited from the end-of-quarter push, to jump two positions (#12), while the Tesla Model X had a record breaking month, with 93 registrations, allowing it to end the year in #21.

The runnout-mode Kia Soul EV also jumped two positions, to #14, while both Hyundai Ioniq's, the BEV and PHEV, climbed one position, the first to #17, while the second was up to #19. Korea is rising…

Looking at some sub-categories, the Best-Selling SUV/CUV was the Volvo XC60 PHEV (interesting how PHEVs and SUVs overlap, isn't it?), the BMW 225xe A. Tourer won once again the Best Selling MPV award (lack of competitors tend to do these things…), while the Tesla Model S and Volvo XC90 PHEV renewed their Best Selling Large Car and SUV trophies, respectively.

In the brands ranking, Renault (37%) won its 7th consecutive(!) title, followed at a distance by the #2 Nissan and the #3 BMW, both with 10% share, but with the Japanese managing to keep a 300 units advantage over the German brand.

This was a great return to form by Nissan, after ending in 4th last year, with only 6% share, while BMW dropped one position regarding 2017.

Finally, a quick mention to the large e-LCV sector in France, the 8,103 units represented a 35% growth regarding 2017, with the Renault Kangoo ZE not giving chances to anyone, almost doubling sales regarding last year, to 4,176 units, far, far ahead of the #2 Nissan e-NV200, that registered 649 units. 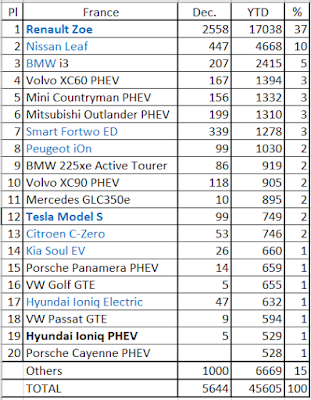 Looking into 2019, if the Renault Zoe has the next Models title already assured, with the French hatchback probably crossing the 20,000 units mark, the Second Place should see an interesting race between the Nissan Leaf and the upcoming Tesla Model 3, with the Californian possibly reaching some 5,500 deliveries in 2019.

Below these, there should be a few models making some 3,000-ish performances, besides the BMW i3, we should see both the Kia Niro EV and Hyundai Kona EV also reaching these heights (assuming the Korean makers can get enough batteries, of course…), while the Peugeot 3008 PHEV, said to land by October of 2019, should make a strong last quarter of the month, becoming not only the 2019 Best Selling PHEV, but also another contender for a Top 5 presence.

But, while the 2019 year sure looks more interesting to see than this past year, i believe the true disruption will only come in 2020, when Peugeot plays its cards, starting to deliver its 208 EV, finally forcing the Renault Zoe to play game and make an effort to keep #1, while the 3008 PHEV will go after the Nissan Leaf and Tesla Model 3 for Third position, thus making the PEV podium a lot more similar to the mainstream one.
Published by José Pontes at January 12, 2019