Tesla Model 3 tsunami (Spanish edition)
The Spanish plug-in market hit 2.084 units in March, and the interesting thing is that both powertrain technologies have helped to this good result, as not only BEVs jumped 192% YoY, to 1.301 units, but PHEVs have also surged in March, having registered 1.721 units, up 157%, so plugin hybrids in Spain aren't yet hit by the doom and gloom that is hitting them elsewhere.

Looking at market share, March reached 1.7%, with 1.1% belonging to BEVs, while the remaining 0.6% comes from PHEVs.

As for last month best sellers, the big news was the first full deliveries month of the Tesla Model 3, with 396 units, being a big contributor for the 62% BEV share within plugin sales.

While it wasn't enough to beat the all-time record (554 units, in October '17, by the Renault Zoe), this Model 3 performance allowed it to jump to the leadership, surpassing the Nissan Leaf, that surprinsingly enough, had a record performance last month, with 278 registrations, an outstanding feat, considering the arrival of the 62 kWh version in a couple of months, and the possible damage that the Model 3 could have done to it.

The BMW Group had a strong month, with the Mini Countryman PHEV scoring a record 178 units, pulling it to #4, while the BMW i3 delivered 118 registrations, the nameplate best result in 18 months, allowing it to climb to #6, and finally, the BMW 225xe A. Tourer delivered 166 units, a new year best, jumping to #8.

Other models climbing positions are the VW e-Golf, now #9, while the Volvo XC60 PHEV has broken its personal best, with 79 registrations, allowing it to climb to #11, and the Kia Niro PHEV is now #15.

Three recently landed long range BEVs are already showing up on the Top 20, with the promising Audi e-Tron in #17, followed by the Jaguar i-Pace, in #18, and the Kia Niro EV in #19.

If the Tesla Model 3 deliveries are jumping through the roof, the remaining lineup is sinking, with both model sales shrinking over 50% YoY. If the Model S drop (only 7 units last month) is easily explained by the cannibalization of its younger sibling Model 3, the Model X (11 deliveries) drop is not so simple to explain, as the Model 3 is not direcly impacting its sales, and the Model Y is still some time off.

I believe the most immediate reason for the Model X sales slump is called Audi e-Tron, despite not being as good or efficient as the Californian, the fact is that it is an alternative, something that so far it didn't existed, until now, if you wanted a large EV, you only had Tesla to choose from, wether you liked or not, so the American maker had that segment of the market all to itself. Not anymore. 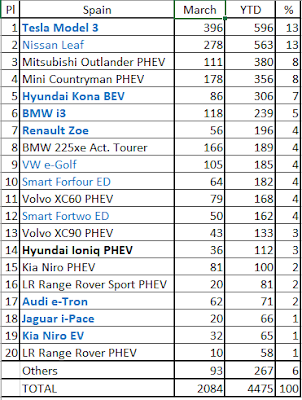