Tesla Model 3 tsunami (Swiss Edition)
The Swiss PEV market smashed the previous sales record (1.341 units) last month, by registering 2.162 units, with the PEV share jumping to 7.5% (6.4% from BEVs, 1.1% PHEVs), pulling the 2019 PEV share to 5.3%, almost doubling last year result.
The Tesla Model 3 deliveries tsunami was the main reason for this brilliant performance, with the sedan having 1.094 registrations, not only an absolute record for a plugin, but also the first time that an electric vehicle is #1, all fuels included.

In the 2019 ranking the Model 3 is #4, well ahead of its direct ICE competition, the Mercedes C-Class is only #9 in the mainstream market, with 1.127 units, but with the #2 VW Golf (1.681 units)not that far away, the Californian can easily reach the runner-up spot, and even aspire to remove the Skoda Octavia (2.361 units) from the leadership.

But if the Model 3 is pulling plugins to new heights, the Tesla Model S and X are losing steam, while both ended 2018 in the Top 5, now the highest placed (Model S) is only #8.

Their ICE competitors are also further ahead, while last year the Model S was running at the same pace of its category best sellers, this time the class Best Seller (Mercedes E-Class - 551 units) is selling much more than the Tesla flagship, while things for the Model X are even worse, as last year it managed to feature regularly in the category Top 5, now it is only #12 in the full size SUV class...And only 4 units ahead of the just landed Audi e-Tron.

Looking elsewhere, the Audi e-Tron landed with the right foot, by delivering 93 units in its debut month, jumping immediately to #11, only 4 units behind the Tesla Model X, while two other recent long range BEVs are also shining, with the Hyundai Kona EV in #4 and the Jaguar i-Pace in #9.

On the PHEV side, the leader is the Mitsubishi Outlander PHEV, in #5, being followed by the Volvo XC60 PHEV, #7 and 48 units behind the Japanese SUV.

Another Swede on the news is the new generation Volvo V60 PHEV, that joined the Top 20, in #16, delivering 31 units last month, the nameplate best performance ever on this market.

In the manufacturers ranking, Switzerland is now Tesla (42%) turf, with Renault (10%) in a distant 2nd place, followed by BMW (9%), while Volvo (8%) is set to return to the medal positions soon. 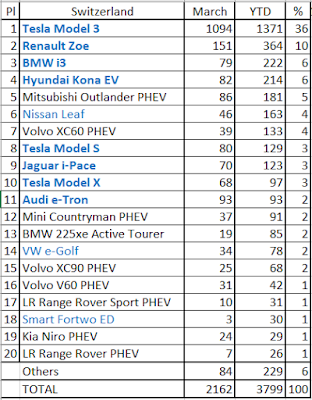