BMW i3 #1 in August with record performance

August brought another different monthly winner, after the VW e-Golf in July, Model 3 in June, Outlander PHEV in May and Renault Zoe in April, it was time for the BMW i3 to pick up a Monthly Best Seller win, its first in 2019, and with a record number to boot: 992 registrations!

BMW couldn't have picked a worst time to announced the killing of it's innovative BEV...

Another BMW model shining was the BMW 225xe Active Tourer, that with 575 registrations, had its best result in 11 months, allowing it a place in the podium and to overtake the Outlander PHEV as last months Best Selling Plugin Hybrid.

A mention also to the #5 Hyundai Kona EV, that had 441 registrations, its best ever month, which could signal (fingers crossed on this one) a higher availability of batteries, ergo, more more units to deliver.

In the YTD table, things became a bit more confusing in the front group, with the leader Renault Zoe busy doing a skin generation change and the Tesla Model 3 in an off peak month, it was time for the BMW i3 to work overtime (In August, of all months...) and recover ground to the two competitors, with the German hatchback displacing the Tesla Model 3 to the 3rd spot, while reducing the distance for the French model to 758 units, still a sizeable disadvantage, but if the new Zoe takes longer than expected to land and the Tesla sedan fails to repeat the previous four-digit peaks, then maybe, just maybe, the BMW i3 can still win the 2019 title...Admittedly a long shot, but not impossible, i give you that.

Outside the podium, we have the relentless rise and rise of the Audi e-Tron, now in #7, although it seems that at this point, Audi's electric SUV has met its table ceiling, as it would need a significant step up in sales to reach #6.

In the full-size category, the race is on between the #11 Mercedes E300e/de twins and the #10 BMW 530e, with the Merc reducing the Bimmer advantage to just 148 units, so the revised 530e is coming in the right time for BMW to try and keep the E-Series at bay.

Finally, the Tesla Model S scored 98 deliveries, its best off peak result in 15 months, which means the recent range upgrade is helping the flagship Tesla to recover its mojo.

As for the other Tesla, the Model X, things weren't as rosy, as the 60 deliveries meant that that it lost ground to the #20 Jaguar i-Pace, now more than 150 units ahead.

Outside the ranking, we should highlight the Hyundai Ioniq PHEV, that registered 99 units, staying just one unit below the Top 20, with 611 units.

Outside the podium, we have Mitsubishi (8%, down 1%) lost ground to the medalists, while Volkswagen and Hyundai, both with 7% share, are trying to catch the Japanese brand. 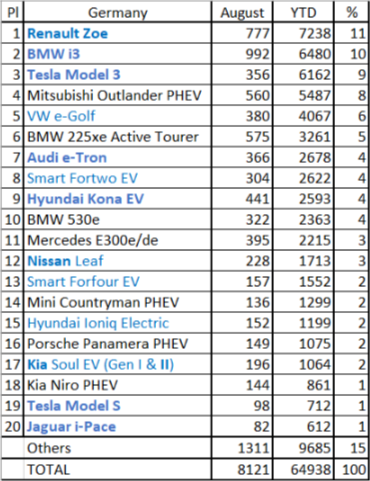