This time, the Renault Zoe was relegated to #3, seeing its sales drop 26% YoY, all because of the hiccups deved from the recent restyling.

Outside the podium, the company car market is making itself felt, with the #4 Mercedes E300e/de twins being the (not so) surprise winner of the PHEV category, adding it to the Luxury car trophy, beating its arch rival, the #5 BMW 530e, that must have been suffering from internal competition from its smaller sibling, the new 330e, that ended in 6th.

But the BMW Group didn't ended there, as the small and spicy BMW i3 ended the year rising to #7, thanks to a record performance of 102 deliveries, an impressive result for a model that is over six-years old, while in #9 we have the Mini Countryman PHEV and in #10 the BMW 225xe Active Tourer, making it 5 models from the Group in the Top 10!

Elsewhere, a mention to the last minute climbs of the Mercedes C300e/de twins, to #14, with the Volvo S/V60 PHEV twins also doing the same, in this case to #15.

With 4 midsize cars on the Top 20, one can say: #company cars rule.

Finally, a reference to the Porsche Cayenne PHEV joining the table in the last minutes, in #20, displacing the Smart Forfour EV.

Funny enough, Porsche's SUV was the best selling plugin coming from the VW Group, doubling the registrations of the VW e-Golf! Imagine that!

Interestingly, the best selling brand outside the podium was Mercedes(!), with 10% share, with the local importer seeing its efforts in the company car segment being rewarded with a #4 spot, ahead of Renault, with 8%. 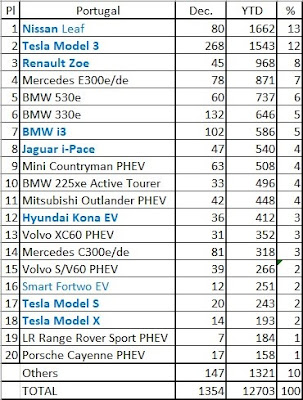 Finally, looking at 2020, the Tesla Model 3 should continue go after the Best Seller title, probably reaching 2,000 units, while one wonders if the Nissan Leaf will have enough life in it to run at the same pace as the Californian.

Expect also the Renault Zoe to recover sales and the BMW 330e to become the new darling of the company car audience, possibly pulling it into the PHEV leadership and maybe even a podium position.

The Tesla Model 3 is only 3rd, behind the moderately electrified BMW 3-Series (29% of registrations coming from the PHEV version) and Mercedes C-Class (15%)
Outside the podium, we have the unplugged BMW 4-Series and Peugeot 508, and with this last model weeks away from starting delivering its PHEV versions, expect soon the 4-Series to be the only unchargable model here.
Midsize SUV Best Sellers
This SUV category is moderately electrified, although we still have the unplugged Mercedes GLC on top, with the BMW X3 closing the Top 5, the #3 Mitsubishi Outlander PHEV (64% of all Outlander registrations) and the #2 Volvo XC60 (41% of sales belonged to the PHEV version), along the fully electric Jaguar i-Pace make a majority of pluggable models here.
With the BMW X3 PHEV said to land soon, and the VW ID.4x, among others, landing throughout the year, we could see a fully electrified Top 5 sometime next year.

In the full size car category, electrification is pretty advanced, not only we have the fully electric Tesla Model S in 5th, but also the two front runners have a large degree of electrification, with the leader Mercedes E-Class owing 50% of its sales from its plugin versions, while the #2 BMW 5-Series has 45% of registrations belonging to the PHEV version, and even the #3 Volvo S/V90 twins (41%) has a significant degree of electrification.

With the Audi A6 soon to be electrified and the Porsche Taycan landing in a few months, this segment is sure to continue being on the forefront of electrification.
Full size SUV Best Sellers
The full size SUV category seems to be the most advanced segment when it comes to electrification, not only we have 1 BEV nameplate in the top 5 positions (#4 Tesla Model X), but we have also a fully electrified Top 5, with the podium bearers having a large degree of electrification (82% for the Range Rover Sport, 76% for the Cayenne, 44% for the XC90).

Add this to the fact that the #5 BMW X5 (6%) is still ramping up production of its interesting PHEV version, and the electrification rate should only go higher. And don't forget the incoming Mercedes GLE PHEV, with 100 kms electric range and fast charging is also coming soon!

These are surely welcome news in one of the most polluting vehicle segments.
Published by José Pontes at January 16, 2020