Registrations were up for the second time in a row last month, a first this year, with registrations going up 58%, to some 241.000 units, with plugin hybrids in particular jumping 92%, to 76.000 units, which is already having a positive impact on the YTD numbers, now back in black, if by just 1%, to 1.4 million, so we should see the plugin market end the year with positive numbers.
On the other hand, the overall automotive market lost momentum, having dropped 10% YoY last month, leading to a August PEV share of 3.8% (2.5% BEV), pulling the 2020 plugin share to 3.1% (2.1% BEV), above the 2.5% of last year.
The future will depend much on the development of the pandemic and the seriousness of the economic crisis, but whatever happens, expect plugins to weather the storm better than the overall market, increasing its PEV share on the way.
With BEV growth trailing behind PHEVs (+46% vs +92%), the BEV/PHEV breakdown is slowly becoming more balanced, with the current standing now at 67% BEV, 33% PHEV.

With a helping hand from the Chinese EV market, the leader Tesla Model 3 reigned supreme in August, but the rising star Wuling Mini EV scored 9.150 units last month, so in the future the small 4-seater might steal a couple of monthly wins from Tesla's sports sedan, speaking of the Californian maker, the Tesla Model Y won the monthly Bronze medal, thanks to a record 8.052 deliveries, allowing Tesla's new baby to jump five spots in the Top 20, to #6, and expect the Model Y to jump further positions, possibly reaching the podium next month.
Another model with strong results was the Hyundai Kona EV, that scored 5.692 deliveries, allowing the Korean crossover to remove the Nissan Leaf in the last place in the podium, while the #15 Ford Kuga / Escape PHEV was up 5 spots, and is on the way to the PHEV podium.
A mention also for the good performances of a number of Chinese EVs, besides the aforementioned record result of the Wuling Mini EV, that allowed it to join the Top 20 in #18, the #10 GAC Aion S scored a Year Best score of 4.071 units, while outside the Top 20, the #21 Great Wall Ora Black Cat (formerly known as Ora R1) had 3.748 units, its best score in over a year, and added to the #23 Chery eQ, that with 3.307 units, had its best score since June last year, it seems to confirm return of form from Chinese small EVs, and the Wuling Mini EV is the most extreme example of that.
On the PHEV side, the most impressive model is the new Mercedes A250e (3.510, new record), while the Li Xiang One also hit a personal best performance, with 2.711 units, and could join the table soon. 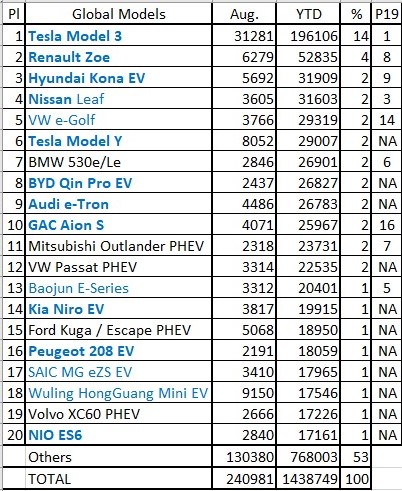 Manufacturers: SAIC and Mercedes shine, but Tesla rules supreme
Tesla's score (43.887 units) was its best off-peak performance in the maker history, and is in a different league, but below it, there were also record performances, namely from Mercedes, that registered 12.227 units, its second record score in a row, making the three-pointed star brand the Best Selling European brand(!) in August, ahead of the BMW arch-rival, and even the almighty Volkswagen.
This performance allowed the German brand to climb one position, to #10, and should climb higher in the next few months.
In a different scale, young little NIO, now in #20, continues to grow, having reached a record 3.971 deliveries last month, as it tries to keep up with the Big Boys.
In the first half of the table, BYD was up one spot, to #3, switching positions with BMW,  thanks to 14.053 units, the brand best score this year, which means the Shenzhen maker is back in form and willing to recover the runner-up spot.
Shanghai Auto, or should i say, SAIC + SGMW(1), is also on the rise, reaching the runner-up spot last month, with 18.000 deliveries, and is now looking to surpass BMW too.
Volvo climbed to #6 last month, with the Swedish maker continuing to climb in the table, now 10 spots above last year result.
The lower half has seen some action too, with Ford climbing to #16, while Porsche was up to #18.
Outside the Top 20, a reference to #22 Great Wall and #21 Chery, that registered 4.919 and 4.322 units respectively, their best score since June 2019, and both are some 3.000 units behind the #20 NIO. 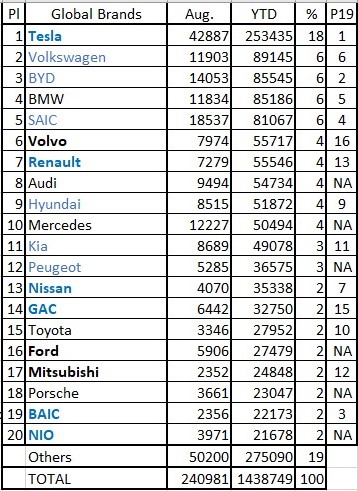 Looking at OEM growth, if the PEV market grew 58% last month, some OEMs grew well above that average:

For further information, Hyundai-Kia was up 65% YoY, while Tesla grew 71%.

Of course, this simplistic approach is skewed to help smaller OEMs, because if you sold 2 units instead of 1, it means a 100% growth, hence the success of the Top 3 OEMs.

So the best approach is to look at total volume, and here, the OEMs that grew more regarding August 2019, volume wise, are:

If the first spot of the Volkswagen Group is surprising, if you think about the sales uptick that the German Conglomerate had in the past year, it is just the following of a trend started late last year. And the VW Group even has a shot at following Tesla in September, because if the Californian will benefit from a high tide next month, Volkswagen will benefit from the "ID.3" effect...

Because this is the second month of the quarter, one shouldn't read too much into Tesla's numbers, as the previous normal quarters (Q4 2019; Q1 2020) saw Tesla increasing the seasonality of sales, with lower than average numbers in the first two months, and then an end of quarter month with higher than usual deliveries, so i wouldn't be surprised if the same happened again this quarter. Will we see it have a record month in September?

The real surprise continues to be the Daimler Group (Mercedes + Smart + Denza), that thanks to another good month of the Smart brand, as well as the ramp up of the Mercedes PHEVs and the EQC, the German Group is becoming an unlikely success story, and with a bunch of new models set to increase production (CLA250e, B250e, GLA250e, EQV...), expect them to continue showing up here.