After the December sales peak, January signaled the expected hangover, but still, sales stood at some 35,000 passenger PEVs, up four-fold YoY, making this by far the best January ever.


Last month, the Chinese OEMs represented roughly 40% of all PEVs registered globally, an impressive number, especially considering that January is usually one of the slowest months in the Chinese PEV market.


Despite exports still being symbolic, the domestic market is more than enough to absorb the current production, helped by the fact that it is a highly protected market, as foreign brands only have 5% of PEV sales. Of this (small) cake, 2% belongs to Tesla, with the remaining 3% being distributed by BMW (1%), Cadillac (1%), and other manufacturers (1%).


In January, plug-in hybrids had an exceptional month, collecting four out of the Top 6 positions, which can be explained by the fact that they are less dependent on subsidies. Nevertheless, the BAIC EC-Series is still the poster child of Chinese PEV market, scoring close to 8,000 units, while BYD placed two plug-in hybrid models, the Song SUV and the Qin compact sedan, in the Top 5.

#1 – BAIC EC-Series: Winning the Best-Selling status for six months in a row in a competitive market like the Chinese is no small feat, even harder is to be the Global Best Seller during those same six months, but that’s exactly what the EC-Series has done, having registered 7,870 units in January. The little city EV is becoming disruptive in its home market, owing its success to a trendy design, reminding that of a Crossover, improved specs (Now with 200 kms / 125 miles range) and competitive pricing (USD 22,000). With the Chinese AND the Global editions of the 2017 Best Selling PEV Award in its hands, the EC-Series has started 2018 in the same tone, and I wouldn’t rule out the possibility that this small EV could outsell the Nissan Leaf AND the Tesla Model 3, becoming the 2018 Best Seller…In the World. Again.

#2 – JAC iEV7S/E: One of the EV pioneers in China, selling plug-ins since 2010, JAC is trying to regain relevance with its iEV7S/E compact Crossover, which registered a record 3,356 units in January, allowing it to reach the runner-up position last month. A vehicle targeted to urbanites, for a competitive USD 26,000 before incentives, you get a trendy compact vehicle (Kia Soul-sized), with the 33kWh battery providing just enough range (251 kms / 157 miles NEDC), to cover the needs of the urban jungle.

#3 – BYD Qin PHEV: This is the most common plug-in in China, with almost 100,000 units registered to date, and thanks to recent changes, BYD’s “Model 3” (0-100 kms/h in 5.9s) got its mojo back and is once again a major player, registering 3,339 units last month. With a competitive price (USD 31,000 before incentives), sales are expected to remain high, as long as BYD manages to make enough of them.

#4 – BYD Song PHEV: Build Your Dreams (BYD) current star product, the plug-in hybrid version of its Song compact SUV had 2,681 registrations, a good start of the year, staying above its nemesis, the #5 Roewe eRX5 PHEV. BYD’s “Model Y” won both the Best Selling PHEV and SUV trophies last year, but this year it will have a harder time to secure these Best Seller status, namely because of... 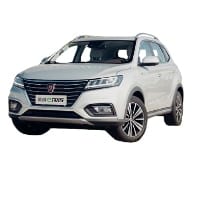 #5 – SAIC Roewe eRX5 PHEV: …This model. Shanghai Auto has high hopes for their eRX5 twins (BEV and PHEV), and especially for the plug-in hybrid version, having registered 2,217 units last month, earning it its second Top 5 place. Will it be able to beat the BYD SUV this year? Despite being beaten on pure specs (60 kms e-range NEDC), compared with the Song (70 kms), the Roewe seems to be a more accomplished vehicle, and with time it can win street cred, thus improving sales in the long run.

Outside the Top 5, and even in a slow selling month, there are a couple of models beating records, like is the case of the #6 Roewe i6 PHEV, that with 2,088 units, had its best result since it landed 9 months ago, or the surprising Cadillac CT6 PHEV, a model that so far hadn’t really made an impact in its class, but in January it registered 451 units, shattering its previous record (195 units), managing even to collect its first Top 20 presence, outselling even the almighty Tesla Model S (330 estimated deliveries).


It’s not often that you write that Cadillac outsells Tesla…


Two new additions to the Top 20 joined the ranking in January, with the promising GAC Trumpchi GE3 jumping to #13, thanks to 536 units (New personal best), while the #10 BAIC EX-Series small Crossover reminds us that Beijing Auto is not only the EC-Series, there are other nameplates in the stable able to pull Top 20 presences.


Looking at the manufacturers ranking, BAIC started the year in the lead, with 25% share, with last year winner BYD not far behind (21%), this was only a first stage of a race that promises to be tough between these two titans, both running for the 2018 title.


In Third Place we have Shanghai-based Roewe consolidating its Bronze medalist status, with 13% share. 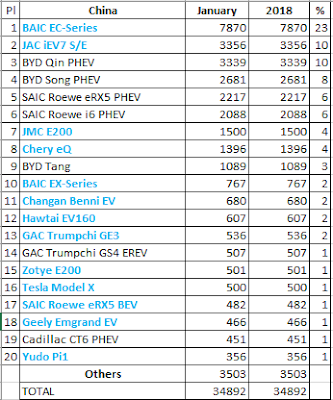