VW e-Golf starts in the lead

The European passenger plug-in market started the 2018 season with almost 26,000 registrations, growing 36% regarding the same period last year, a promising start that unfortunately is being made for the most part thanks to plug-in hybrids (+44% YoY), with this technology representing 53% of deliveries.


And yet, out of the five best selling PEVs, four are BEVs, and the majority of the Top 10 belongs to fully electric models.


Well, if BEVs are among the Best Sellers, then why are PHEVs outselling them?


First, there aren’t that many fully electric to choose from, in this Top 20 there are 7 BEVs, against 13 PHEVs, and with the exception of the Kia Soul EV, all of them are regular small to compact car models, no fully electric station wagon is available, no MPV, and especially, Crossovers and SUVs are sorely lacking in the BEV menu, which is not the case on the PHEV side, where there’s 7 Crossover/SUVs to choose, with a wide array of prices, one MPV, two station wagons…


Second, all seven all-electric nameplates have waiting lists, some of them are over 6 months long, so if there weren’t production constraints, BEVs would easily overcome plug-in hybrids. Long gone are the times where high-end executives complained no one wanted EVs…


Looking at PEV share, 2018 started with 2%, and once the much awaited new models arrive (Leaf II, Kona EV…), expect sales to pick up even further, with the plug-in share possibly ending the year at around 4% share, and even some 6% in December...


If the VW e-Golf dethroning the Renault Zoe was the headline in January, the surprise of the month was the Smart Fortwo ED reaching Fifth Place, it seems the tiny two seater is experiencing an overwhelming demand, with the Smart EV already having a nine-months waiting list, suffering from a recurrent problem: “Not enough batteries”.

#1 Volkswagen e-Golf – Remember the time when saying “e-Golf” was synonymous with “Norway”? Not anymore, despite Norway still being the nameplate largest market (514 units), the German BEV had 506 deliveries in the Netherlands and 450 at home, so the 1,985 units registered in January are more spreaded than a year ago, benefits of a larger battery and more favorable context, which originated a demand that Volkswagen wasn’t expecting, leading to long lead times, something the automaker promised to cut significantly during this year, thanks to increased production.

#2 Renault Zoe – The 1,871 deliveries of January marked a 27% drop YoY, the nameplate worst performance since April, with no known production hiccups, and the demand as strong as ever, this slowdown can be attributed to the fact that LG is not having enough batteries to provide the French automaker. As for market individual performances, despite the dismal result at home (633 units, worst result in 14 months), there were decent numbers in Germany (299 units), Norway (334 units) and Spain (104 deliveries).

#3 BMW i3 – The German Stormtrooper Hatchback sales were flat in January, with 1,867 units, and with the all-electric version now representing 75% of deliveries, one can consider the i3 as part of the BEV team. Looking at individual countries, strong results in Norway, with 614 units (All BEV), Germany (359 units), and France (172). Looking into 2018, expect deliveries to pick up in the coming months, as BMW goes into full production in its Leipzig plant and delivers as much i3 and i8 as the factory can deliver.

#4 Mitsubishi Outlander PHEV – Solid as a Rock, the Japanese SUV saw its sales slip slightly (-1% YoY), to 1,165 registrations, but despite this minor setback, the Mitsubishi model continues to profit from its unique mix of space, AWD, range and affordability (40.000€), to make it popular in markets like the UK, Norway, Sweden, or Iceland (126 registrations in this last one). In the long run, with no direct competitors in sight and a promised update during the year, the Japanese SUV will probably stay among Europe’s top sellers, running for the Best-Selling PHEV trophy.

#5 Smart Fortwo ED – The tiny two-seater seems destined for success this year, registering 1,143 units in January. If Germany (729 deliveries) is the main driving force, other market performances are also impressive, with Italy (131 units) and France (98) being the most important. Despite the limited range coming from the small 17.6 kWh battery and the lack of fast-charging, the new Smart Electric has been met with enthusiastic demand, catching Daimler off-guard (Surprise, surprise!), leading to 9 months lead times for the model, making the OEM quest to be an all-electric brand even more pressing. I mean, if there is a car that should have been electric from the beginning, it’s the Fortwo, right?

Looking elsewhere, the first month of the year has brought a couple of surprises, with the most important being the Seventh Place of the Hyundai Ioniq Electric, with a record 1,017 registrations, with the Korean still production constrained after more than a year on the market, one wonders when will Hyundai deliver enough units to satisfy demand.


The Porsche Panamera PHEV joined the Top 20, in #16, thanks to 678 registrations, and it could be even higher if…It wasn’t suffering from a common disease (Not enough batteries). No wonder then, that the Head Honchos of the Sportscar maker are now deeply in love with the Mission E, as they scent the smell of fresh money coming in…


Other models also shined in January, the Kia Soul EV (779 units) had its best result in over two years, and apparently PSA got some extra units from GM and delivered 335 Opel Ampera-e, a new personal best for the badge-engineered EV.


Looking at the manufacturers ranking, last year winner BMW (17%) started the year in the lead, followed by Volkswagen (15%) in Second Place, with Renault (9%) ending in the last place of the podium. Interestingly, last year podium was exactly the same.


Outside the medal places, Volvo (8%) is coming strong, with Kia and Mercedes, both with 6% share, following suit. 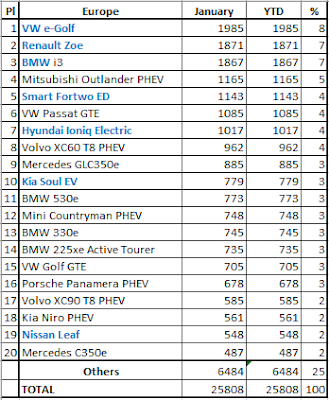