The light at the end of the tunnel?
Despite not having the full sales breakdown of PHEV models, i had to publish a post on the moves happening in Denmark, but first, a little of background on the local market is needed, to understand the current moment, after a positive run until 2014, year that PEVs hit 0.9%, things went off-rail in 2015, as the local government announced fiscal changes that would hit EVs in a big way, which lead to a big sales surge by the end of the year, especially regarding Tesla, leading to a record 2.3% share.

Of course, that also lead to a big sales hangover in the following year, with PEV share dropping to just 0.6%.

But the long, hard road out of hell, didn't ended there, as 2017 was even worse, with another drop, this time to 0.4%, a performance that placed Denmark far behind from their Scandinavian neighbors.

There have been talks of new fiscal changes for this year, that i do not know if they have been put in place, but one thing is certain, the 2018 picture looks quite different, in more ways than one, first, sales have gone through the roof this year, to 662 units, placing the 2018 PEV share at 0.9%, while at the same time, PHEVs have taken over this market (52% share), a significant change, considering BEVs used to have some 90% share here.

After these context lines, let's go to the fun part: Plug-in sales.

The two times Best Seller (2013 and '14) Nissan Leaf is back to the in the leadership, thanks to the new generation with the local importer betting heavily on its EV, while the remaining podium positions go to the VW Golf GTE (Already sold out for this year!) and Hyundai Ioniq Electric.

Looking below, it's a PHEV-laden topic, with the recent Kia Niro PHEV showing as a possible medal candidate soon. 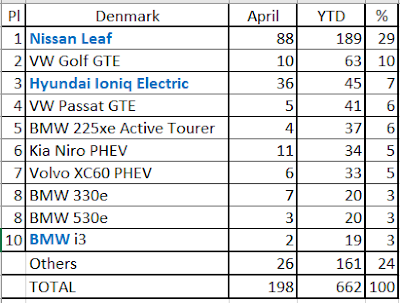