Tesla Model S ahead in Models, Volvo leads in Manufacturers

Considering most PEV markets are experiencing two, even three, digits growth rates, Luxembourg can be considered as a slow lane market, after a fast growing 2017, sales in 2018 are just growing 7% YoY, with 290 new PEV's registered in 2018, with the PEV Share showing a rather low 1.5%. Let's hope the second half of the year shows this market back at the fast lande
The two times Best Seller (2016 & '17) Tesla Model S continues in the lead, with 25 units, but only 9% share, as this is one of the most fragmented markets worldwide. followed closely by the Renault Zoe and the Volvo XC60 PHEV, with the French hatchback trying to recover the Best Selling trophy it had won in 2013 and 2014, while the Swedish SUV is confirming once again its popularity across Europe.

With surprising low positions, we have the #12 Tesla Model X, with locals showing a distinct preference for its lower-riding sibling, while the BMW i3, #9 last year and #2 in 2016, is just #17 this year, allocation problems?

A different story explains the #20 position of the all-conquering new Nissan Leaf. For some reason, the Japanese hatchback never caught on here, ending in #20 last year, and #12 in 2016. In fact, the highest standing for the Nissan model in Luxembourg was Third, its only podium place, back in 2013. Not enough promotion from the local importer?

Looking at the manufacturers ranking, we have possibly the most balanced race anywhere, with the current leader Volvo (16%) being closely followed by BMW (15%), with the Third Placed Volkswagen (13%) not that far, while Tesla (12%) and Mercedes (10%) are on the lookout to join the medal positions. 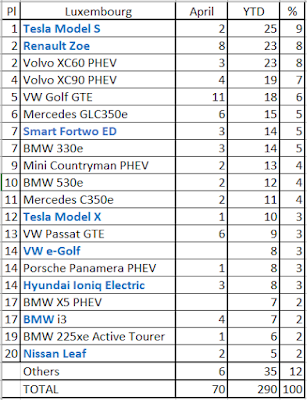