This brilliant performance had much to do with the record month of Tesla, with both its models hitting unseen heights and making a 1-2 win last month, the Model S result is particularly impressive, as it is a nameplate with 5 years in this market and by now it should have been feeling the long shadow of the Model 3 baby brother.

Of course, maybe the higher taxation of expensive BEVs next year might have something to do with it...Then again, while others are still presenting their high end EVs (Mercedes, Audi…), or having troubles ramping up production (Jaguar), Tesla is in place to profit from this sales surge from the start. Call it First Mover advantage...

Back to September sales, the new generation of the Nissan Leaf (292 units) is doing wonders for the nameplate sales, as the Japanese hatchback already sold 4 times more units in the first 9 months of 2018, than it had in the whole of 2017.

Elsewhere, the #4 BMW i3 also shined, by delivering 172 units (1 had a range extender), the model best result since 2015, while the Hyundai Ioniq Electric closed the Top 5, with 146 registrations.

Looking at the 2018 ranking, while the Tesla Model S (1,052 units in September, PB) can already prepare the 2018 Best Seller ceremony, its Model X (593 units, also PB) sibling rose to Third Place, switching places with the VW e-Golf, and is now racing the Nissan Leaf for the Second Spot, in order to repeat the 1-2 win that Tesla had in 2017.

In fact, the real race that Tesla has in this market is not against other EVs, but with the ICE competition, and in that field, Tesla also had good news, while the Tesla Model X was already head and shoulders ahead of the competition (#1 Model X - 1,912 units; #2 - Volvo XC90 - 717 units), last month the Tesla Model S surpassed the BMW 5-Series and became the Best Selling car in the E-Segment (Full-size vehicles, in US language), with its 3,379 units now being well ahead of the 2,729 registrations of the Second Placed BMW 5-Series.

On other news, the Opel Ampera-e (European Chevrolet Bolt) climbed to #7, surpassing the Renault Zoe, with the French hatchback scoring its worst performance (31 units) in over a year, which makes us wonder what's happening to Europe's Second Best Selling EV in Dutch lands, are local buyers not into the Zoe?

I mean, with BEVs representing 87%(!) of the PEV market, the Zoe should be thriving here…

Outside the Top 10, there were some interesting developments, with the Hyundai Kona BEV jumping six positions to #12 (Top 10 soon?), the BMW 530e surprising everyone, jumping three places to #11, while the Smart Forfour ED was up one position, to #17, thanks to a record performance of 26 deliveries, and there is a new (old) face in the Top 20, with the Volvo XC90 PHEV now in #19, thanks to 39 units, its best result in 20 months.

Outside the Top 20, the Jaguar i-Pace registered 21 units last month, which is not much, considering the thousands of reservations that the car has in this market, but it was just enough to make it the best selling Jaguar last month...

In the manufacturers ranking, Tesla (36%, up 6%) is the undisputed leader, with Nissan (14%) hanging on in Second Place, while the race for Third Spot has Hyundai (9%) securing the podium place by a thread, being just 2 units ahead of Volkswagen, and 27 in front of BMW, but with the Kona BEV set to grow significantly in the coming months, the Korean should keep the Bronze medal until the end. 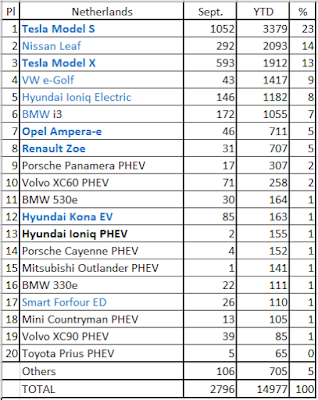