45% BEV Share! 60% PEV Share! (History in the making)
Despite not hitting March's record sales, mostly due to PHEVs being down 32% YoY, the September sharp drop in sales (-21%) on the mainstream market, originated by the previous WLTP-sales rush, has lead to record BEV (45%) and PEV (60%) shares, and the share could have been even greater, hadn't the VW e-Golf scored a miserable score (It registered only 133 units, its worst performance in over 4(!) years), along with some models waiting list (Hyundai Kona BEV, Jaguar í-Pace, etc...) being (very) production constrained.

Adding them up, we have 25.000 reservations in the waiting...And we are not counting the Tesla Model 3!

In this context, 2019 should see Norway get some 66% PEV share, with peak months possibly reaching 80%. Ambitious? Possibly, but next year we will see the Tesla Model 3 cross the ocean, a 60kWh Leaf, Kia Niro EV, second year of the Hyundai Kona BEV, etc...Now, it doesn't sound so outlandish, does it?

Proof of that are plug-ins reaching a record 60% share in September, with the fuels mix showing BEVs well in front (45%), followed from a far by gasoline (16% of all sales, vs 22% last year), while PHEVs were Third, with 15% share, while diesel-powered cars hit a new low, with 12% share (It had 18% twelve months ago), with the remainder (11%) going to regular HEVs.

Looking at September Top Sellers, it's all about Tesla and the Nissan Leaf, with both Tesla's hitting year best performances, 1.234 units for the Model X and 782 for the Model S, this last result is the most surprising, as one could expect that the sales of the oldest Tesla  nameplate would already be affected by the Model 3 long shadow, but apparently there's still enough life in it to continue moving on.

The Japanese hatchback scored its second consecutive four-digit score, so it seems the Leaf sales have stabilized around 1.000 units/month, enough to win the Best Seller status, not only on the PEV market, but also on the regular mainstream market.

The remaining places went for the BMW i3, with 458 units, while the Volvo XC60 PHEV scored 380 units, its best performance since April, and a rare brightspot for plug-in hybrids this month. 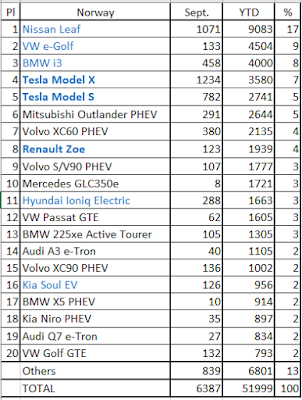 Looking at the 2018 ranking, the most important news were both Teslas climbing one position, with the Model X reaching #4 and the Model S #5, thus making a 100% BEV Top 5.

The Volvo XC60 PHEV was the only plug-in hybrid to have reasons to smile about, climbing one position, to #7. Will it be able to discuss the Best Selling PHEV title with the Mitsubishi Outlander PHEV? Doubt it, but you never know...

But the mommentum is on BEVs, particularly Korean: The Hyundai Ioniq Electric had its best result since 2016, with 288 deliveries, and could climb a few spots in the coming months, while its recently arrived Kona BEV sibling registered 180 units and could should reach a Top 20 position before year end.

Another Korean on the rise was the Kia Soul EV, that climbed two positions, to #16.

A final reference to the 114 registrations of the Jaguar i-Pace last month, with September being its first real deliveries month, let's hope the production constraints are a thing of the past and the British SUV quickly picks up...the pace.

Looking at the manufacturers ranking, Nissan is in the lead (17%, down 1%), but is closely followed by BMW (15%), Volkswagen (14%) and Tesla (12%, up 1%), so at first sight, the Japanese automaker should need to keep a close eye on them to remain with the Gold Medal, but because PHEVs are a big part of the German pursuitors, they will have a harder time selling in the last quarter of the year, so Tesla might even get ahead of them and end 2018 in the runner-up position. 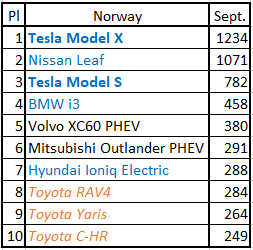 With the PEV share at 60%, the plug-in market continues to merge with the mainstream, breaking down sales by fuel source, we have four BEVs in the Top 4, followed a balanced mix, with 1 BEV, 2 PHEVs, 3 HEVs and no ICE models in sight, but the telling story is that the Best Selling HEV (Toyota RAV4) was only #8, with the remaining hybrids ending right behind it.

With regular ICE models (again) wiped out from the Top 10, and the Best Selling HEV only #8, will we see a 100% plug-in Top 10 soon? Let's say...December?
With the aforementioned WLTP-related sales hangover, even Fuel Cells had their best month ever, Share-wise, with the September FCEV Share reaching 0.08%, double of the 2018 share (0.04%), thanks to 8 Hyundai Nexo registrations, pulling the yearly tally to 38 units (24 Toyota Mirai and 14 Hyundai Nexo).