VW e-Golf #1 for the first time

The great surprise in December was the Hyundai Kona BEV scoring 143 deliveries, a new personal best, allowing it to jump four positions, to #6, making it a 100% BEV Top 7 in 2018.
Looking at the models yearly ranking, the VW e-Golf won its first Best Seller trophy, with 1.836 units, a new all-time high, and three times the 2017 registrations of the German BEV.

The four times winner (2017; '16; '14; '13) Renault Zoe this time ended in Second Place, with sales dropping 16% YoY, while the Third Spot saw a last minute change, with the Nissan Leaf surpassing the BMW i3, with the German hatch dropping to its lowest place since 2014, and the Japanese collecting its first medal since 2013.

Looking at PHEVs, the Porsche Panamera PHEV secured its first trophy in this category, resisting to the advances of the #10 Mitsubishi Outlander PHEV and #11 Mini Countryman PHEV.

Despite this win, the Porsche model lost the Best Selling Luxury PEV award to the #7 Tesla Model S, and this despite the Californian losing half(!) of sales in just one year…(Insert Model 3 long shadow comment)

Underlining what can be a promising 2019 for Korean makers, the Kia Niro EV landed in December, with 16 deliveries, promising to be another Top 10 model coming from the Hyundai-Kia stable. 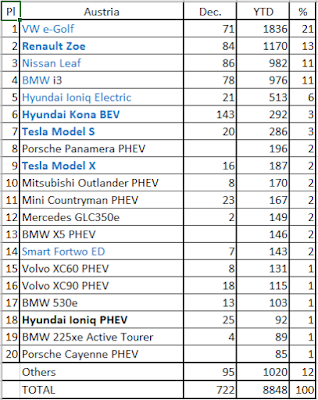 Looking into 2019, Volkswagen will have a hard time to retain both titles, as it will be a transition year between the e-Golf and the next generation BEV, the ID Neo.

The two strongest candidates to win #1 will be the Hyundai Kona BEV, possibly surpassing the 2,000 units, as long as they get enough batteries, of course, and the Tesla Model 3, that in theory can reach some 4,000 deliveries, but it could be hampered by Tesla focusing its deliveries in larger markets, like Norway, Netherlands or Germany.