The 9.409 units registered last year in Denmark, represented a 105% jump regarding 2018, finally surpassing the 4.762 units of 2015, when local incentives for EVs were significantly reduced, followed by a long period of receiding sales.

But that now part of the past, this surge in sales lead to a 2019 PEV share of 4,2%, a new record, with December alone reaching 7,5%, which could give some indications on where the final 2020 plugin share will end...

Speaking of Tesla, the big star of this year was the Tesla Model 3, that registered 2.439 units (587 in December alone, that made it the Best Selling model that month, all models counted), doubling the result of the runner-up (and 2018 Best Seller) Kia Niro PHEV, but despite this brilliant result, it still wasn't enough to beat the record of its Tesla Model S sibling in 2015, when it registered 2.736 units...Maybe the midsizer can get there in 2020?

Still, the Model 3 performance was decisive in the BEV recovery regarding PHEVs, with all-electrics jumping from just 32% in 2018, to the current 59%

With the Model 3 storming into the leadership and the previous leader Kia Niro being relegated to #2, who got the Bronze medal?

Why, another Kia, or course! The Optima PHEV jumped from #6 in 2018, with 335 units, to a podium position in 2019, with double (779) the registrations, confirming its popularity in Scandinavian countries, where pluggable, big Station Wagons are a thing.

Looking at the remaining models ranking, a mention to the rise of the Hyundai Kona EV to 4th place, while the Mitsubishi Outlander PHEV finally cracked this market, showing up in 2019 in #6.

Outside this Top 10, a mention to the record deliveries of the Audi e-Tron (i am writing a lot this phrase, am i not? Is Audi ramping up production? Mmmm…), with the German SUV registering 50 units last month, while the new VW Passat GTE registered 33 units in December, its second record performance in a row, which could mean that both these plugins will have a say in the shape up of the 2020 ranking.

In the Manufacturers ranking, Tesla (29%, +4%) benefited from its last month of the quarter peak to distance itself from Kia (22%, -3%), winning this year Best Seller award, with Hyundai ending in Third, with 14% share, well ahead of the 4th Renault, with just 6% share (that Captur PHEV is badly needed, if Renault wants to expand its sales). 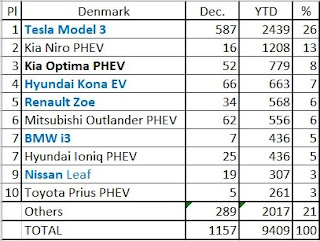 A final note regarding 2020, the Model 3 and the Koreans will stay strong contenders here, with the first building up on the current success to try and reach 3.000 units this year, and the seconds possibly adding some 50% of deliveries on their current levels, so newcomers should have a hard time reaching podium positions, but i believe the new Renault Zoe could have enough pace to follow the Koreans, while other EVs, like the Peugeot 208 EV or the new VW e-Up! will find their way into the Top 10.
Published by José Pontes at January 09, 2020