Looking at December Best Sellers, the Mercedes E300e/de twins three-peeted the monthly leadership, with 964 units, narrowly beating the high tide Tesla Model 3 (926 units), while the Renault Zoe returned to the podium, in 3rd, with 780 units, signaling the return of the French hatchback to form.

Just outside the podium we have the forever young VW e-Golf, with 764 units, while the BMW i3 closes this Top 5, with 630 units, beating the #6 Smart Fortwo EV (623 units) in the finish line.

The German PEV market is known for close races and its changes and surprises, with the 2019 edition was no exception, with a leadership change in the last month of the year, as the Renault Zoe managed to beat the the BMW i3 by just 49 units, with the French hatchback repeating last year title, after two consecutive years as Second Best.

Despite losing to the Zoe, the BMW i3 won the runner-up place, improving on the Third Spot won in 2018.

Despite a strong December, the Tesla Model 3 stayed 418 units behind the leader Renault Zoe, with the Californian ending in the last place of the podium.

In December, there were some last minute changes, the Smart Fortwo EV was up one spot, ending in #7, and their stablemates Mercedes C300e/de climbed to #15, while the BMW Group also had reasons to smile about, with the Mini Countryman climbing to #13, thanks to a record 355 registrations, and the BMW 330e jumped 3 positions, to #17, with the German midsizer scoring a record 529 units.

Finally, the Porsche Cayenne PHEV joined the ranking in the last month of the year, in #20, with Porsche placing both its plugins in the Top 20.

"What about the big Teslas?" - you might ask, well the Model S scored 114 units, while the Model X had 89 deliveries, far from the 964 registrations of the Mercedes E300e/de, or the 253 units of the Porsche Cayenne PHEV, but like the Volvo XC90 PHEV, they are playing in one of the most difficult foreign fields, so it would be surprising if they could beat the local heroes, which highlights even further the outstanding performance of the Model 3 in Germany in 2019. 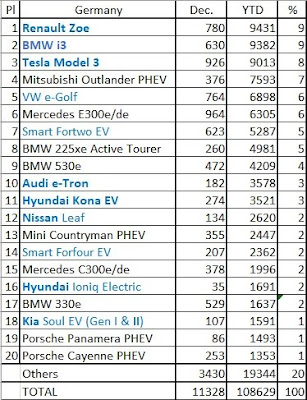 The German PEV market is traditionall one of the most balanced and unpredictable out there, but in 2020 a major shift will happen, as the plugin market starts to get into the mainstream (around 6% PEV share), the boredom stability of the overall market will start to set it, with the main interest being in which month will the VW ID.3 take over the leadership from the Renault Zoe, with my guess being between October and November.