VW e-Golf stuns in fast growing market (7% Share!)
Sales continue to grow fast in Denmark, with the 1.286 units registered last month meaning a 99% growth rate, placing the 2020 PEV share at 6.9% in the first month of the year, a stark departure from the 4,2% of last year, which was helped by a 12% drop in the overall market.

The VW e-Golf came out of nowhere to the leadership in 2020, with an amazing 180 registrations, when its previous best in Denmark had been just 17 units, back in December 2015...Could this unexpected result have been the result of a fleet deal? Can anyone confirm this?

The German hatchback was closely followed by another veteran model scoring a record result, with the Mitsubishi Outlander PHEV registering a record 172 units, while the #3 Kia Optima PHEV also performed a record score, with 107 units.

Just outside the Podium, we have another Kia model, the #4 Niro PHEV, with 96 units, while the Peugeot plugin hybrids landed with a bang, with the crossover 3008 PHEV landing in #5, with 83 units, while the midsizer 508 PHEV was #7, with 61 units.

Between the two French models, we have the Nissan Leaf, in #7, with its 72 registrations representing the model's best performance in this market in the last 15 months, a rare beam of hope for the Japanese model in the present days.

In the Manufacturers ranking, Volkswagen (22%) is the Best Seller, closely followed by Kia (20%) in Second Place, and Mitsubishi (13%) in a distant Third Spot, while Peugeot (11%) is on the lookout to get a podium position soon. 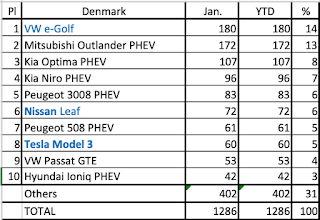