Looking at market shares, the February result (8%) dragged the 2020 PEV share under the two digit mark (9.3%), but still, this is well above of the 2.8% of 2019...Looking at BEVs alone, they now have an amazing 6.8% share, sure, it helps that the overall market is down by 13% this year, but this only confirms the rule that when a given plugin market hits two digit shares, the overall market starts to suffer...

Looking at last month Best Sellers, it's a French Fest, with 6 domestic models in the Top 7, the leader Renault Zoe delivered 3,076 units in February, not as impressive as the record 5,331 units of January, but it is still almost 3 times as much Zoe as in February '19...And enough to win it the 13th spot in the overall market, so chapeau to the Renault hatchback.

Elsewhere, the Peugeot 208 EV was once again the runner-up, with another 2,000-something result, which could mean that the Peugeot EV could have already found its cruise-speed, happy to secure the Silver Medal in its domestic market.

To this, Renault says: "Merci!"

The biggest surprise of the month was the 3rd place of the Tesla Model 3, with its best score in an off-peak month in France, having registered 1,025 units, which could prelude a record month for the Californian in March...Do i hear 2,000 units?

The remaining top positions go to DS models, with the flagship DS 7 crossover  in #4 and the smaller DS 3 crossover in #5, with the Premium French brand possibly finding a raison d' être in electrification.

Right now, it is already the legacy maker (if one can call it that) with higher plugin rate in its sales (in 2020 it is above 20%), so PSA would be smart in electrifying it completely, as soon as possible, after all, that would go well with their motto: "Spirit of avant-garde". At least, that's my 5cts on the topic...

Below the DS models, we have two other members from the PSA stable, with the Peugeot 3008 PHEV crossover in #6 and the Peugeot 508 PHEV (handsome) midsizer in #7, making 5 PSA models in the Top 7.

Looking at the 2020 ranking, the first position seems to be already carved in stone, as the Peugeot 208 EV seems unable to remove the Renault Zoe from the leadership, but below these two, a lot can still happen, with the DS 7 climbing to 4th, thanks to a record 728 units, while the Tesla Model 3 jumped 11(!) positions, to #5, thanks to an impressive 1,025 units, so expect the Tesla midsizer to climb into the podium next month, profiting from the usual last quarter-of-the-month high tide.

But in order to keep the Bronze Medal until the end of the year, the Sports Sedan needs to keep a close eye on both PSA crossovers, that surely won't give up the podium seat without a fight.

One thing is certain, with the exception of the leadership, that continues in the hands of the Zoe, everything else has changed in the top positions, regarding the 2019 standings: The Nissan Leaf was in 3rd, now it is only 8th, the #4 Mitsubishi Outlander PHEV was the best selling PHEV, and SUV, now it is relegated to a discrete #18, leaving its titles for the Peugeot 3008 PHEV and DS 7 PHEV to discuss, while the 2019 #5 BMW i3 is now just #15...Disruption, anyone?

Elsewhere, the Hyundai Kona EV was up to #9, thanks to a record 414 registrations, while we have 3 new faces in the Top 20, all plugin hybrid SUVs:

- The new Mercedes GLC300e joined the Top 20, in #19, with this new version of the Mercedes GLC scoring 188 registrations in February, the best performance for the Merc midsize SUV since 2017;

But expect more new models showing up soon in the Top 20, as there is plenty of activity below the Top 20, like the landing of the Opel Corsa EV, with 165 units, the first full month of the new Volvo XC40 PHEV (120 units) and VW e-Up (108), while the Audi e-Tron has crossed for the first time into three-digit territory (101 units last month), and the fresh from the oven Peugeot 2008 EV crossover ramps up production (85 units in February).

Outside the podium, we now have Tesla and Kia, both with 4%, but only the Palo Alto maker is able to lift off in March, and try to steal the Bronze Medal from DS. 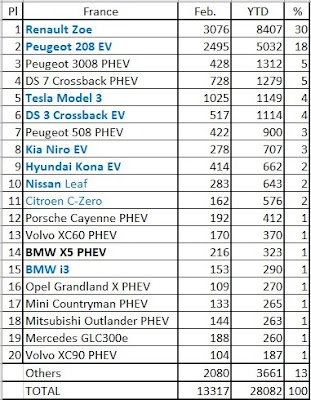