Following the start of the new CO2 EU rules, the German plugin market has (finally) clicked and February signaled another record performance, its second in a row(!), having registered 16,508 units in February, growing 144% YoY, with last month plugin share reaching a record 6.9%, pulling the yearly tally to 6.7%, helped by the 9% fall of the overall market.

Despite BEVs continuing to grow at a fast pace (+76% YoY), the lights are focused on PHEVs (+279%!!!), with several new models hitting the market, allowing plugin hybrids to continue outselling pure electrics, even if the difference is negligible (51% vs 49%).

Looking at the fuels mix, diesel continues to slide (32% in February), while unplugged hybrids are growing, now with 9% share, meaning that 15.7% of the German market is already electrified. Not bad, eh?

February had a surprise leader, with the VW e-Golf winning its first Monthly Best Seller title since last July, with Volkswagen milking its electric hatchback to the last drop, thanks to generous discounts, allowing it to hit 1,475 deliveries, its second record performance in a row(!), so it seems the veteran EV is set to end its career with a high note.

But the German maker didn't stopped there, with two other models in the Top 5, the small e-Up was 4th, with 679 units, its second performance in a row, while the Passat GTE ended the month in 5th, with 640 units.

So, 3 out of 5 for Volkswagen, with two consecutives records to boot. Not bad, VW, not bad, at all...

The remaining two spots went to the Renault Zoe (#2, with 1,352 units), and the indestructible Mitsubishi Outlander PHEV (#3, 821), with this last one continuing to impress by its vitality.

Regarding the 2020 table, the two front runners are already winning a sizeable distance over the competition, and only the #12 Tesla Model 3 can aspire to get close to them, but for that to happens next month, it will need to pull a record result in March, that although not impossible, it has become more difficult due to the current Covid19 crisis.

With the VW e-Golf ending its career in a few months, and the expected general slowdown in the coming months, only the Renault Zoe can hope to give some fight to the VW ID.3, in the race for the 2020 title.

Well, if the production ramp up of the ID.3 is indeed happening, as the several car park pictures prove, actual ID.3 registrations are still in symbolic numbers, with only 81 deliveries last month.

Not that the Volkswagen Group needs it now to grow, besides the rise and rise of the VW e-Golf, the Passat GTE midsizer was up one position to #4, and the small e-Up climbed to #7, while on the Audi side, the e-Tron stepped one position to 6th, thanks to a record 591 units (second in a row), and the A3 PHEV jumped four positions, to #14, thanks to 466 registrations, its best performance since 2017.

Finally, Porsche's new baby, the Taycan, had 195 deliveries, a new high for the sports sedan, as the ramp up continues to evolve, we might see it soon in the Top 20.

But the Volkswagen Group didn't have the exclusive of good performances in his Top 20, with the Mercedes C300e/de jumping into the Top 10, in #9, while BMW 330e was up to #11 and the Tesla Model 3 rejoined the table, in #12, with the Californian set to jump into the Top 5 next month.

Outside the Top 20, there's plenty to talk about, like the BMW X3 PHEV (95 units) ramping up production, the new Kia Soul EV registering 229 units, a new high for the Korean MPV-disguised-as-crossover, while Volvo continues to increase its electrification rate, with its S/60 PHEV twins scoring a record 308 units, and the new XC40 compact SUV having 143 deliveries.

Mercedes has finally found a way to ramp up production of their new plugin models, with the compact A250e registering 112 units, the new midsize SUV GLC300e delivering 121 units, while its all-electric sibling, the EQC, has finally crossed into three-digit territory (Yay!!!), with 109 units. 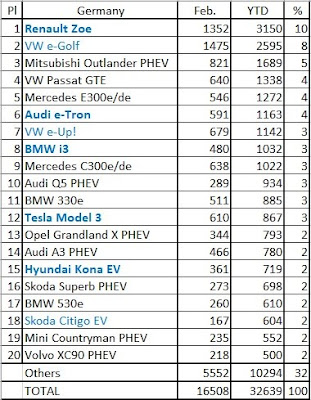 With the Tesla Model 3 in an off month, we have four models with a significant degree of electrification, with the leader VW Passat having 12% of its sales coming from the GTE version, while the #4 Mercedes C-Class has 17% of sales coming from its PHEV versions, and the #2 BMW 3-Series, 12% share.

But the champion of electrification is the #5 Skoda Superb, with 20% share.

We have a fully electrified Top 5, although these models have various degrees of electrification, from the 4% PHEV share of the Mercedes GLC, to the 80% of the Mitsubishi Outlander, passing by the 7% of the BMW X3, 13% of the Volvo XC60 and the 22% of the Audi Q5.

This last performance begs the question: When will Mitsubishi make the Outlander an entirely plugin model?

Anyway, 5 electrified models out of 5 is already something, and with the Merc GLC PHEV and BMW X3 in ramp up mode, things will look even better in a few months...
Full Size Car Best Sellers

Finally, the flagship Mercedes S-Class had just 4% of its sales coming from its PHEV version, something that will surely change in the upcoming next generation.

The full size SUV had a slow month regarding electrification, with two unplugged models on top, the leader Mercedes GLE delivered just 4 units of its PHEV version (for some reason Mercedes Germany is not betting in the 350de version), while the (still) unplugged VW Touareg was the runner-up last month.

The #5 Volvo XC90 has grown its PHEV share to a significant 40%, while the BMW X5 PHEV represented 17% of the X5 sales, so added to the full EV Audi e-Tron represented the 3rd plugin model on this Top 5.

With the new VW Touareg PHEV coming soon, and (hopefully) the Mercedes GLE350de finally starting to be delivered in Germany, it will be a matter of time until this Top 5 becomes fully electrified.
Published by José Pontes at March 20, 2020