In normal years, the summer months of July and August signal a slowdown in registrations, as most buyers go on holidays...Only, 2020 is not a normal year, and with the pandemic-related disruption now in the past, the Belgian automotive market (-1% YoY) is back at normal numbers, and plugins resumed the fast lane, having beaten their own sales record for two months in a row (June and July), with last month scoring a best ever score of 3.695 units, a three-fold increase over the same month last year, pulling the YTD registration numbers to 18.219 units.

Last month trend in this market were compact SUVs and locally-made models, with the local hero Volvo XC40 PHEV in the intersection of both trends, winning July's Best Seller status, with 374 units, allowing it to close in on the #2 Tesla Model 3, just 13 units ahead, and the current leader BMW X5 PHEV, 255 units away, so we could see the compact Volvo reach #1 soon.

Speaking of BMW, the recent X1 PHEV was 2nd last month, with a record 248 deliveries, allowing it to jump to #12, but the highest position change happened in #6, where the Audi e-Tron, 3rd in July with a record 182 registrations, climbed 3 positions, reaching Sixth.

Other models on the rise were Skoda Superb PHEV, up to #10, while the Ford Kuga PHEV continues its upwards trend, jumping three spots, to #14, while the Mercedes A250e joined the ranking, in #18, thanks to a record 154 units.

In a PHEV-friendly market, another trend is also visible, with this market being tilted towards the high end of the market, as we only have one small model in this Top 20, the #4 Renault Zoe, while 70% of the models in this Top 20 belong to the D-Segment (midsize) and above.

Outside the Top 20, a reference to two BEVs that are on track to join this Top 20, with the Hyundai Kona EV scoring a record 129 units, while the Porsche Taycan performed 142 deliveries, its highest result so far.

The 4th placed is Mercedes (8%), looking to reach a medal position soon. 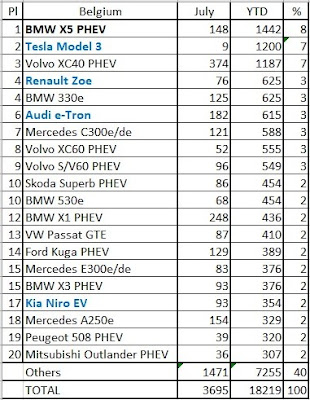