At this pace, some months of the second half of the year could reach 10% or more. And that’s when things get (even more) interesting…


BUT. Starting in June, 26, NEV subsidies were cut off completely for vehicles with less than 250 kms electric range, while those with higher range saw their subsidies halved, which made some smaller range models to peak in June, so from now on, certain low end models should see their registrations dry up, and the question will be if the market will see its growth being affected by it.


Back to the present days, China is without doubt the most fascinating and fast evolving plugin market on Earth, with several seismic changes happening at the same time, it’s not only the Tesla Model 3 making waves, it’s also foreign brands scaling up plugin production to meet the 2019 quotas, it’s the local startups trying to hit relevant volumes in order to survive, all while the local big players race between each other to see who gets to launch more models and ramp up their production faster.


This month was filled with surprises, with BAIC, Changan and Tesla shining, allowing the Californian brand (3% share) to come closer to the foreign leader, Volkswagen, with 4% (-1%), both ahead of BMW (2%).


In June, the most important surprises in the models ranking came in #2, with the sedan Changan Eado EV scoring a record 7,340 units, while in #4 we have the Tesla Model 3, with an estimated 6,500 units.

#1 – BAIC EU-Series: The electric sedan scored a record 17,916 units last month, reaching the #15 spot in the overall ranking, confirming to be the brand’s right bet for the year, and while Beijing Auto has managed better results in the past (20,648 units with the small EC-Series, in October ’18), the EU-Series sedan is a larger (and pricier) proposal, meaning more revenue and profit for the maker. The design and specs (215 hp, 416 kms / 260 mi NEDC, US $32,500) allows it to remain a popular choice, but with appealing electric sedans landing every month, BAIC will have to keep a close eye on the ever-expanding competition, if it wants to keep leading the pack.

#2 – Changan Eado EV: “Chan-who?!?!” – you’d be forgiven for not knowing about this brand, as they have been performing under the radar in the NEV market most of the time, but after Geely, they are the largest Chinese automotive brand, so it was surprising they hadn’t been more active regarding EVs, but it seems they have finally awaken to the current market disruption and performed their best month ever in June, with the Eado EV sedan scoring a record 7,340 units. Playing in the heart of the Chinese plugin market (Model 3-sized sedan, $30,000-ish price, 430 kms / 269 mi NEDC range), the Lexus-inspired model doesn’t profit from a powerful motor (only 136 hp), compared to the 200-plus hp of the BYD and BAIC models, but Changan hopes to profit from the strong name recognition (the Eado is its best-selling model) to win a large customer base.

#3 – BYD Yuan EV: The brand Baby Crossover seems to be stuck at 6,000-something monthly results, which would be something to praise in almost any other automaker, but we are talking of BYD here…With the brand now prioritizing BEVs, battery demand is increasing even faster than before, so higher priced models (Tang, Song, Qin, etc) are getting ahead of the Yuan, hence the rather disappointing 6,566 units of June. With unrivalled specs (58 kWh battery, 410 kms/255 mi NEDC range, 163 hp motor), and price (25,000 USD), this is was the year strongest candidate for the Best Seller title, up until now.

#4 – Tesla Model 3: The poster-child for electric mobility has landed in China and despite some pretty respectable numbers, somehow it has failed to live up to the expectations of some of the most enthusiastic Tesla fans, that expected the sports sedan to take over the market, like it did elsewhere. Still, the Tesla sedan is making its own disruptive path, with the estimated 6,500 units of June, representing the best score ever for a foreign model in China, allowing it to reach the 4th spot in June. At this point, the Tesla nameplate is far from the domination held in North America or Europe, but it seems to be the only foreigner with the potential to run at the same pace of the local Best Sellers. It’s like LeBron James, undisputed king in the Eastern Conference, but when on the Western Conference…It’s a different ball game.

#5 – Chery eQ: One of the pioneering EV brands, Chery had won China’s Best Selling EV title three times in a row (2011, ’12, ’13), and the automaker regained relevance with the small eQ EV, having registered 4,965 units last month, its best result in 2019, allowing it to collect another Top 5 position. But the increased competition (JAC iEV E-Series, BYD e1…), and the end of the subsidies (it has less than 250 kms range), should create difficulties in the nameplate career. Let’s wait for the next episodes, to see if it confirms.


The market is dynamic as ever, this time helped by the subsidy derived pull forward of low range EVs, with plenty of stuff to talk about.


We’ll start with the most important position change, with the BAIC EU-Series displacing the BYD Yuan EV from the leadership, a first for the Beijing Auto sedan, ending at the same time a 5 month spell of the BYD nameplate in the leadership, that in turn had interrupted a 16 month lead of the BAIC EC-Series.


Speaking of BAIC’s small EV, after a fall into the abyss in 2019, in June the hatchback returned to a half decent performance, with 4,744 units, allowing it to return to the Top 20, in #19, but the question now is: Was this a pull forward move, in order to profit on the incentives, or is this a sustained surge?


The other new face in the ranking is the #20 Dongfeng Fensheng E70 EV, another electric sedan in this Top 20, that registered 3,525 units last month, a new monthly record for a Dongfeng nameplate.

But the Climbers of the Month were the Changan Eado EV, Tesla Model 3 and BYD Qin EV, with all these models jumping 5 (five) positions in the ranking, the Eado EV went up to #11, thanks to 7,340 units, a new high score for any Changan model, while the Tesla Model 3 jumped to #13, just one position below the current Best Selling foreigner, the VW Passat PHEV, while the BYD sedan is now #15, thanks to 3,016 units, a new personal best for the nameplate, allowing it to be just 414 units behind its PHEV sibling, the Qin PHEV.


When the BEV version of the Qin surpasses its PHEV relative (next month?), it will be a small, but significant sign of the current BEV trend (full electrics had 84% of registrations in June, against 80% YTD)


The SAIC Baojun E-Series came back from the dead to score 4,556 units, its best result since June, which is no surprise, considering this will be another model that will lose any kind of subsidy, from this moment on.


The Xpeng G3 EV, from the startup Xiaopeng, is now #17, thanks to 2,237 units, surpassing once again the other local startups, Weltmeister (1,902 units) and Nio (1,340), although this last one is keeping the best-selling full-size SUV title, with its #23 ES8 SUV, all while its smaller (and cheaper) SUV sibling, the ES6, landed this month (413 sales), so expect Nio to recover the Best Selling Startup title soon, thanks to the ES6 production ramp up.


Talking about production ramp ups, the much hyped GAC Aion S sedan went up to 2,016 units in only its second month on the market, already surpassing its nemesis, the Geely Geometry A, that scored 1,743 units in its 3rd month.


But the hottest newcomer is the JAC iEVS4 EV, a compact crossover that had Volkswagen’s helping hand in the development stage, which registered 3,156 units in only its 3rd month on the market. Will we see it soon in the Top 20?


Looking at the manufacturers ranking, BYD (22%) is leading comfortably, thanks to the success of its lineup (there’s 3 BYD’s on the Top 4 spots, and 5 in the Top 15), while below it, BAIC (10%, up 2%) has surpassed SAIC (8%, -1%) thus recovering the 2nd spot, while Geely (6%) is looking to profit in the coming months from the current model launch fever, so that it can finally race for a podium position. 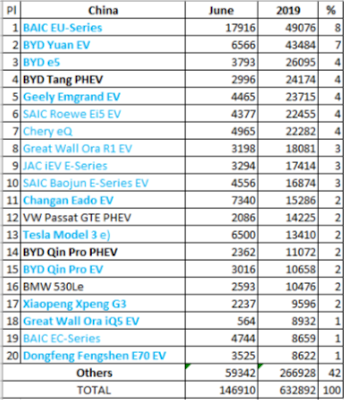