Record Month for Tesla
PEV Sales are hot as a summer afternoon in Lisbon, with 1.263 plugins being registered in June (5% share), up 75% YoY, and just 20 units behind the all-time record, registered last March (1.283 units).

And the result would even be better, if PHEVs weren't losing steam, with growth last month limited to just 10% YoY, which pales next to the BEV growth (+135%), which allows all-electric models to represent 64% of all plugin sales (70% in June), significantly ahead of last year result (54%) and their best result since 2014...

These great performances of BEVs in Portugal have one name: Tesla.

Last month the Californian brand delivered a record 432 units, representing one third(!) of all plugin registrations, with both the Model S (92 units) and the Model X (65) scoring record results, all while the Model 3 stayed just 40 units behind its record, set last March (315 units), so it could hardly been a better month for the brand.

Moving on, if the Nissan Leaf remains in #1 (for how long?), followed by the hot Tesla Model 3, the #3 Renault Zoe also impressed, by scoring 145 registrations, its best result in 2019, an amazing performance, considering the revised Zoe is right around the corner.

Below the podium, the first position changes happened in #7 and #8, with the Mitsubishi Outlander PHEV and Jaguar i-Pace climbing one position, while the BMW 225xe Active Tourer registered 50 units last month, allowing it to go up one position, to #11.

Interestingly, high end plugins are experiencing surging sales, with both the #13 Tesla Model S and #15 Model X jumping positions, and even the Porsche Panamera PHEV was up one position, to #18.

It seems plugins are trendy among the wealthiest in Portugal…

Interestingly, there is not one Volkswagen in the Top 20, and the only VW Group nameplate present is the Porsche Panamera PHEV(!), in #18... 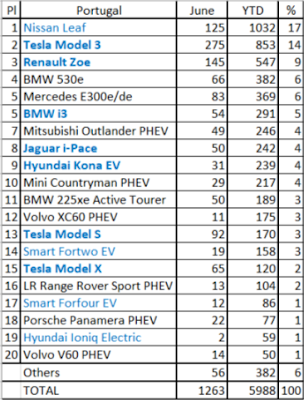 
Comparing the Model 3 deliveries against its midsize competitors, we can see that the Tesla midziser is making important inroads in a usually conservative (and German-loving) category, with the Model 3 reaching already the runner-up place.

With the leader Mercedes C-Class just 285 units ahead, it wouldn't be too much of a stretch if the Tesla started to pressure it by the end of the 3rd quarter, would it?

Interestingly, the Audi A4 sales are simply being decimated, with the German midsize model now being just #7, behind the successful Peugeot 508 and the #6 Volvo S/V60 twins...


Comparing the Model S deliveries against its premium competitors, we can see that the first two are profiting from the success of their subsidy-friendly PHEV versions, with approximately 40% of their sales coming from their plugin versions.

The Volvo S/V90 twins are a distant Third placed, and with the Swedes only 7 units ahead of a re-energized Model S, expect the Tesla flagship to reach the podium during the summer.

In 5th we have the Audi A6, miles behind their German rivals, which makes us wonder why...Oh right! The big Audi doesn't have a plugin version...

Comparing the Model X deliveries against its premium competitors, we can see that the Tesla is close to the top position, with the Range Rover Sport benefitting from its PHEV version (74% of all the model sales) to outrun the Model X.

Will the Tesla Sports-Minivan-SUV be able to reach the leadership soon? Say...In September?

If PEV adoption seems to be going at full charge in Portugal, with the current 5% plugin share allowing it to be one of the Top 10 countries globally, the fact is that not everything is not everything is perfect, in fact, there is one important factor in EV adoption that is far, far, FAR, from being positive.

And that is Charging Infrastructure.

While plugins have been growing at a fast pace in the past years (+58% YoY in 2019), the local infrastructure is consistently growing at snail pace (+2%)…

...So you can imagine where this is taking, right?

According to EAFO, together with France, Portugal is the EU country with the highest number of BEVs per charging point (8), but it won't be long until Portugal becomes the sole leader, because in France EV adoption is growing at half the pace of Portugal but, an important aspect to remember, its charging infrastructure is growing at a 5% rate...Twice as much as in Portugal.

So, why this apparent dissonance between plugin sales and charging infrastructure?

Of the three big charging operators, the passive attitude of GALP and PRIO are understandable, because they run their business selling fossil fuels, with charging stations being 0,00...01% of their business, so it is natural that both operators do not bother with expanding their network, as it would ultimately compete with their regular business.

As for the 3rd operator, the local utility EDP, it is beyond me why they are not betting in increasing the number of charging stations all over the country, as it would be an entirely new source of profit for them, and as seen in the graph, demand is there, namely in big cities and especially in Lisbon and Porto, where ride hailing companies (eg, Uber) are fast electrifying their fleet, which means there are always professional drivers in the local fast-chargers, flooding them even further than usual.

That is why the average waiting time in those (single) 50 kW fast-chargers is around 1 (one) hour.

I have wondered why isn't EDP expanding the network, and the only reasonable explanation i find is that it is waiting to receive some kind of government subsidy to build them, in other countries, the local operators receive(d) grants to implement the local infrastructure, but these subsidies were made with the intent to promote the infrastructure in places where they weren't yet commercially viable.

And in Portugal we are already well beyond that point, maybe in some places (Northeast, for example), subsidies still make sense, because the PEV fleet is still too small to feed a decent charging infrastructure, but in the most developed areas of the country, there are enough vehicles to feed a large expansion of the network, so they just need to get off their subsidy-addiction and start erecting the damn things!

All this is creating "Charging Anxiety", as people always fear that a given charging station can be either down, or will need to wait in queue.

This is starting to dampen demand, especially as we enter the mainstream market, people hear horror stories about the charging infrastructure and then think:

- Well, i would like to buy an EV, but then i would go on holidays to Algarve and would risk being stranded on the road, because there wouldn't be available charging stations on the way there…

That's the point, if the regulatory authorities continue to behave passively, then the lack of a decent charging infrastructure will delay the transport electrification in Portugal, so what can they do?