One of the major trends in Europe this year is the fall from grace of PHEVs, while BEVs continue growing at two digit numbers.

Of of the places where this trend is more visible is in Iceland, where plugin hybrids have played a major role for a long time, here PHEV sales were down 56%(!) in June, increasing the technology yearly drop to -35% YoY, and despite the BEVs best efforts (up 73% this year), it is dragging plugin sales down (-16%YoY).

Despite this setback, and because the mainstream market is dropping even more (-34%), the PEV share isn't that bad (20%), with the best part being that BEVs are increasing significantly their share, with the current result, 7%, being a new record in this market.

Looking at the models ranking, the Mitsubishi Outlander PHEV reigns supreme here, doubling the sales of the runner-up Nissan Leaf, while the Hyundai Kona EV is now 3rd, thanks to a record 28 registrations, and if the Nissan model continues underperforming, we could see the Korean crossover stealing the Silver medal this year.

In the brands ranking, Mitsubishi (23%) is in the leadership, followed by the #2 Volvo (13%), with the new 3rd placed Kia (12%) already threatening the Swedish carmaker. 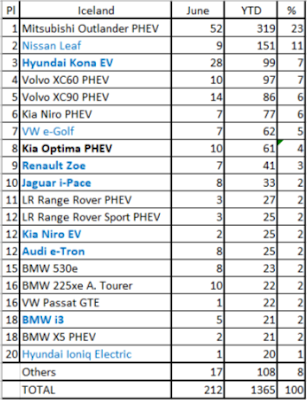 In a market where plugins have over 20% share, plug-ins are becoming more and more synonym with overall best sellers, despite not having full access to the mainstream models ranking, we what we have got is enough to make a draft of the local overall market.

If we mix all powertrains together, the Mitsubishi Outlander PHEV is by far the best selling vehicle in the country, while the high share of plugins is noticeable, as they make half of the Top 10 (and 4 of the Top 5), and HEVs now only have two representatives, in the form of the #2 Toyota RAV4 Hybrid and its Yaris Hybrid sibling, in #8.

Looking at regular ICE representatives, the best only shows in #6, with two of them being high riding crossovers, while the 3rd is a proper off-roader.

As plug-ins continue to increase share, expect at some point in 2019 this Top 10 to be 100% xEV, with regular ICE models being slowly, but surely, pushed out.