Tesla shines but Zoe remains #1
The German PEV passenger car market continues on the right track in June, having registered 8,631 units, with BEVs (+117% YoY), compensating for the PHEV drop (-9%), and all-electrics now representing two thirds of plugin registrations, while the PEV Share was 2.7% in May, with BEVs alone hitting 1.8%, pushing the 2019 plugin share slightly up, to 2.6% (1.7% BEV).

After winning in February and March, the Tesla Model 3 won another monthly Best Seller award, thanks to 1,336 registrations.

The #2 Renault Zoe moved 1,021 units, an impressive performance for a model getting ready to receive significant changes. With the current one clocking regular 1.000/month performances, how high will the heavily revised Zoe go? 1,500? 2,000? Ladies and gents, please place your bets...

Another veteran shining in June was the #5 VW e-Golf, that registered 635 units, its best result since January, so it seems the German hatchback still has plenty of juice in it, even when the appealing VW ID.3 could be Osborning-it by now.

Usually, there's always much to talk about in the German PEV market, but this time it seems that everyone went on vacations early, as with a few exceptions, most players underperformed and haven't made big splashes.

The major exception was Tesla, thanks to the usual last-month-of-quarter peak, the whole lineup had an opportunity to shine, besides the aforementioned June win of the Model 3, with 1,336 units, that allowed it to come closer to the 2019 leader Renault Zoe (they are now separated by just 199 units), the Model S returned to the Top 20, in #19, thanks to 171 deliveries, the nameplate best result in a year, while the Model X delivered 98 units, its best result since March 2018.

Comparing their results against their German ICE competition, the Model 3 ran at the same pace of the Audi A5 (1,388 units in June) and BMW 4-Series (874), but it (still) was far from the leader Audi A4 (5,296), while the Tesla Model S performance was good too, almost selling at the same pace of the German Sports Sedans (Mercedes CLS - 192 units; Audi A7 - 270; Porsche Panamera - 286). Of course, these numbers pale when we see that the Audi A6 registered 4,612 units last month...So, still lots of room to grow, Tesla.

Back to the PEV ranking, the other model climbing positions in the Top 20 were the Mercedes E300e/de twins, that once again climbed the ranking ladder, they are now placed in #11, 253 units behind its full-size car arch-rival, the #10 BMW 530e. Will the Mercedes model be able to catch the Bimmer and become the category Best Seller?

Outside the Top 20, the #22 Jaguar i-Pace (56 units last month), has been unsuccessfully knocking on the door of the ranking for the past few months, and it wasn't in June that the British nameplate joined it, and to make things worse, a new landing, the Audi Q5 PHEV, should surpass it in a few months, as it registered 100 units last month, in what seems to be the start of a promising career for the Audi plugin (At least until the Tesla Model Y lands. And the Polestar 2. And the VW ID Crozz. But i digress…).

Outside the podium, we have Mitsubishi (9%, up 1%) recovering ground to the medalists, while Volkswagen and Hyundai, both with 7% share, are miles behind the best selling brands.

Interestingly, of the 6 best selling brands, only two are German. Mmmm...Makes you think, doesn't it? 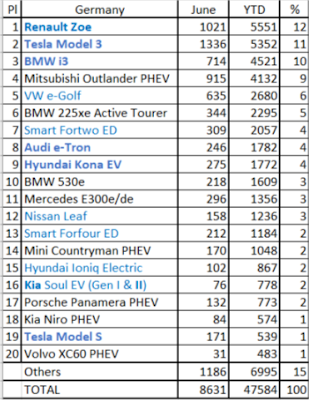