Tesla Shines Bright
Last month, BEVs registrations were up 87% YoY, in a stagnating market (-3%), with every other fuel source dropping (even PHEVs, down a nasty 64%!), which lead to a significant BEV (48%) share, a big departure from the 25% of June '18.

Looking at the remaining fuels mix, diesel dropped to 14% share, while petrol just keeps on dropping, scoring just 16% share (25% a year ago).

So, despite the steep fall from PHEVs (are buyers waiting for the new wave of plugin hybrids? VW Passat GTE? BMW 330e?), PEVs still collected 61% share of the total market. Not bad, eh?

Looking at last month Top Sellers, it was a Tesla fest, with the Model 3 scoring another peak month,  with 3.012 units, incredibly, no SR/SR+ units were delivered, so there might be another big deliveries peak sometime later this year, when these cheaper ones are (finally) delivered.

In #7 and #9 we had the recovering Model S and Model X, with the first scoring a Year Best result. It seems the recent specs update is starting to pay off...

...But it still wasn't enough for the Model X to beat the Audi e-Tron, that ended the month in 3rd, with 574 registrations, 260 units above the result of the Californian. This is a warning for Tesla, in Norway, VW/Audi has the market position to arrive late and still win!

So the current Model 3 domination could be threatened next year by the ID.3. But of course, for that to happen, VW would have to ramp up production fast and without constraints...Something that it's still not proven. But let's leave this discussion for next year...
has the market position to arrive late at the game and still win!
The Nissan Leaf performance was rather disappointing, with the landing of the 62kWh version not enough to stop the sales bleeding (-59%!), was it a case of limited allocation of the new version, is demand just not there for the Japanese hatchback? We will surely know it in the next couple of months. 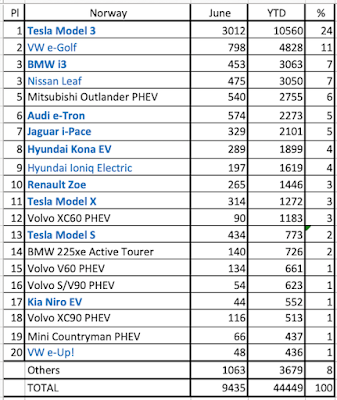 Looking at the 2019 ranking, the only change in the Top 10 was again the Audi e-Tron, that surpassed the Jaguar i-Pace and now sits at #6.
Elsewhere, the Climber of the Month was the Tesla Model S, that jumped seven (7!) positions, to #13, surpassing the Volvo S/V90 PHEV twins, and thus becoming the Best Selling full-size car in the market.
Outside the Top 20, a mention to the Mercedes E300e/de twins, that registered 81 units last month, a new record for the E-Class model, while the Opel Ampera-e (hey, remember me?) did even better, with 83 deliveries, a swan song new year best for the Opel BEV, soon to be replaced by the upcoming Opel Corsa EV. Maybe by now Chevrolet should start thinking in distributing in Norway its BEV wearing its own banner?

With Hyundai and Kia suffering from severe production (read: battery) constraints, the only maker able to steal the 2020 manufacturers title from Tesla, will be Volkswagen. 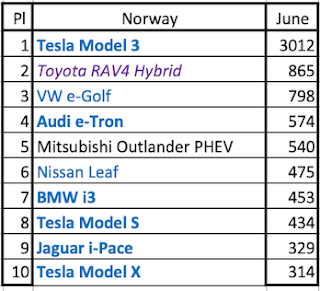 After a discouraging May, plugins, and particularly BEVs, were back with a vengeance, as the Toyota RAV4 Hybrid became the only unplugged model to feature in the Top 10, and right at #2, of all places.

This might be due to the fact that it sits at a market spot (Compact SUV) that has little plugin competition, apart from the heavily production constrained Kia Niro.

Hear that Volkswagen? Peugeot? Others? It's low hanging fruit, people...
Published by José Pontes at July 04, 2019