Right now buyers are running away from fossil-fueled vehicles, with diesels down to 33% share last month, but because BEVs are still model/production constrained, it seems many people prefer to buy a PHEV, or wait in line for a BEV, than to buy/lease another ICE-based vehicle.


Looking at last month Best Sellers, the Tesla Model 3 recovered the Best Seller of the Month award, with 524 units registered, its best result since March.

Kia placed two models in the Top 5, with the Optima PHEV in #4, with 401 registrations (new Year Best), most of them station wagons, while the Niro PHEV was 3rd, with 410 units, also a YB.

But the most surprising performance showed up in #6, with the Tesla Model S scoring 209 deliveries, its best result ever, so it seems the specs update were enough to give it a much needed sales spike.

Although, looking at the Model S performance from another angle, this record result only allowed it to be #5 in the full-size car category, with the #4 Audi A6 scoring 306 units in June...So there's still a lot of room to grow here.

On the 2019 ranking, there is not much to talk about, on the top positions, the Tesla Model 3 won a some breathing space from the #3 Kia Niro PHEV, now 255 units behind.

The first change in the ranking is in #11, with the Tesla Model S jumping three positions, allowing it to be the new Best Selling full-size car on the ranking.

On the large SUV category, there was also a leadership change, with the Audi e-Tron stealing the leadership from the Volvo XC90 PHEV, with the Swedish brand losing both leads in just one month. Maybe it's time to start launching BEVs and improving the specs of the PHEVs?....

Speaking of new BEVs, the new generation Kia Soul EV pushed the nameplate into the Top 20, at #16, pulling the Korean MPV-that-thinks-it's-a-Crossover to its highest standing ever.

Outside the Top 20, we should mention the strong start of the good performance of the Tesla Model X, with 86 deliveries, its best result since September 2016, and beating the Audi e-Tron (75), while the Mercedes EQC landed with a shy 5 deliveries, no doubt demonstration units, while the Volvo XC40 PHEV jumped its deliveries to...24 units.
In the manufacturers ranking, Kia is in the lead, with 25% share, with Tesla (15%, up 1%) jumping to 2nd place, leaving Volvo (14%, down 2%) and Mitsubishi (also 14%) discussing the last podium seat. 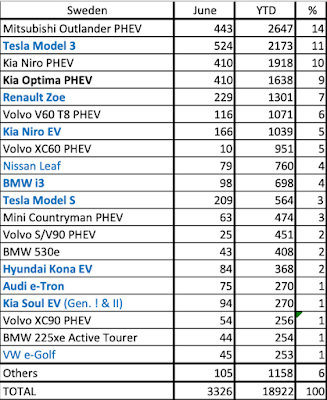 Despite a great June, with 524 deliveries, the Tesla Model 3 remained in #5 on the 2019 category ranking, but has managed to recover significant ground to its German opponents, and if the Californian keeps the pace (fingers crossed), it could switch places with the BMW 3-Series and the Mercedes C-Class and end Q3 in #3.