The French PEV passenger car market registered 5,847 registrations in June, up 25% YoY, and the plugin double-digit growth is even more significant, when we realize that the overall market remained stagnant (-2%).

With BEVs (+42%) growing faster than PHEVs, all-electric cars represented 77% of all plugin sales last month, significantly above the 2019 average (73%), which means that BEVs are winning the upper hand over PHEVs.

This good result from BEVs is reflected in the June Best Selling models, with the Renault Zoe scoring 1,845 units, a new Year Best, being an impressive performance, considering the heavily revised Zoe Neo is right around the corner, as are the EV versions of the Peugeot 208, among others, while the much hyped VW ID.3 is not that far away too…


Elsewhere, the Tesla Model 3 had another high tide, reaching another 1,000/month performance in June, with the 1,097 units almost allowing to beat the 1,153 units of March. Will the Sports Sedan score a new record in September?

The Nissan Leaf crawled back into the 3rd spot, beating the Mitsubishi Outlander PHEV by just 3 units,

Finally, the BMW i3 closed the Top 5, with 190 deliveries, with the German hot hatch career proving to be as rust-free over time as its carbon-fiber body.

In a market known for its stability, the main news was the Hyundai Kona EV jumping to #9, thanks to 189 deliveries, a new personal best, while the Kia Niro PHEV registered 129 units, the nameplate best result in 18 months, despite the chronic battery constraints, the Korean models continue to impress, which makes you wonder how high would they be, if they had enough batteries...

The Jurassic Citroen C-Zero jumped 3 positions, to #15, while the Mercedes E300e/de twins keep on climbing steps, up again one position, to #16.

This is a good sign for the just landed Mercedes EQC (6 registrations), although i would say that the success of the new electric Mercedes will depend more on the maker ability (willingness?) to get enough batteries, than anything else...

Last, but not the least, the Tesla Model S rejoined the Top 20, in…#20, thanks to 108 deliveries, the nameplate best result in 15 months, that added to the good result of the Model X (80 deliveries, new year best), meant that Tesla had its best month ever in France in June, and with the Mercedes E-Class PHEV just 63 units ahead, the Model S still has a shot at being the Best Selling Luxury Plugin car here.

Of course, it would help that both the S and X had further updates to keep them fresh, namely new 2170 cells (higher range, faster charging) and an interior refresh, and please, paleeeze...Get this last one right, providing it a truly exquisite and futuristic interior, not minimalistic/functional like in the Model 3, if one gets the Total Recall's Johnny Cab-like inspiration for the $40k midzise sedan, people buying six-figure vehicles demand something more...special.

Or else, they would just go for the much cheaper Model 3, right? 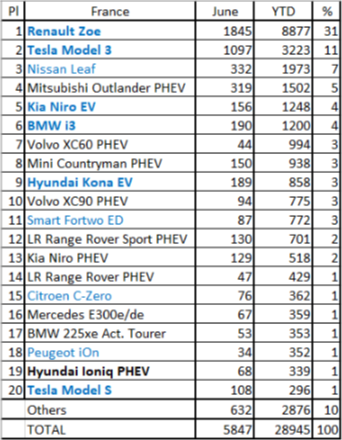