The recent incentives approval has put the Italian PEV market finally on the move, with sales growing 74% YoY in 2019 (0,7% PEV share), while June saw the plugin market hit 1,1%, helped by a regressing (-4%) overall market.

Will plug-ins finally cross the 1% threshold?

Well, it has been a long time coming, but it seems Italy will finally end this year above the all-important 1% mark, and with FIAT launching a new 500e in its home market, 2020 will surely see exponential growth on top of this.

But back at June 2019, looking at the best selling models, the Renault Zoe is the surprise leader, with the French hatchback taking full profit of the new incentives to jump into #1.

The remaining Tesla models also had record months in June, with the Model S delivering 55 units, allowing it to jump 4 spots, to #13, while the Model X was up to #15, thanks to a record 44 units.

In increasingly BEV-friendly market (BEVs in June represented 79% of sales, against 67% in the total of 2019), the Hyundai Kona EV is jumping positions, with the Korean crossover jumping two positions in June, to #9, thanks to 98 registrations.

One quirk of this market is the popularity of the Smart nameplates, with the Fortwo in #4, while the Forfour is #8, with the latter climbing one position last month. The Van-with-Windows Nissan e-Evalia  is also a surprising presence, in #18. 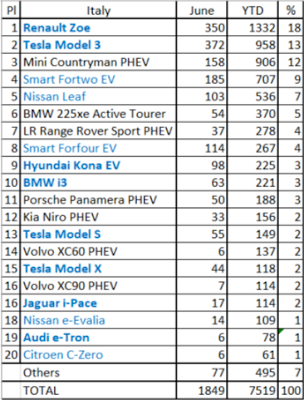