Interestingly, both powertrain technologies are helping out to pull the market up, with BEVs growing faster (+203%) than PHEVs (148%)...Funny enough, plugin hybrids are growing organically, as they lack meaningful incentives. Of course, the fact that the Mitsubishi Outlander represents over 50% of all PHEV sales, might have something to do with this apparently inexplicable growth. The Japanese SUV sucess in Europe is something of a Case Study...

Anyway, all this growth is even more impressive, when we look that the overall market is markedly down in 2019 (-11% YoY).

In June, the Tesla Model 3 (2,487 units) managed to beat its own March record, and wasn't far from beating the all-time BEV record from a single model (2,621 units last December), currently in the hands of the Jaguar i-Pace. Maybe in the next Tesla high tide (September)?

More importantly, the Tesla midsizer managed once again to be #1 in the overall market last month, repeating last March feat, with the Netherlands being the 2nd country in Europe where the Model 3 was the best selling model in June, all models counted.

(For those curious, Norway was the other country, where Tesla delivered 3,012 units last month, becoming the country best Seller in June)

A bit surprisingly, the Mitsubishi Outlander PHEV was 4th, with 248 units, a brilliant performance for a model that is by far the best selling PHEV, and the only plugin hybrid able to run with the best BEVs. I guess name recognition plays a strong point here...

Looking at the 2019 ranking, there wasn't much to talk about in the top positions, in fact, we have to go down to #10, to see position changes, with the Audi e-Tron switching places with the Volvo XC60 PHEV, and becoming the 9th BEV in the Top 10. I guess the trend is clear...

Highlighting Tesla's high tide, the Model X also had a Year Best result, with 45 units last month, so the Californian Sports-SUV could return in a few months to the Top 20. Its Model S sibling is already knowcking at the door... 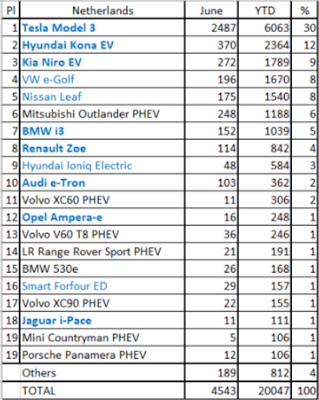 
Comparing the Model 3 deliveries against its midsize premium competitors, we can see that the Tesla is kicking a** doubling sales of the new #2 BMW 3-Series.

Regarding the Tesla Model S & X, their behavior is far less impressive, as both are below their category Top 5, although the Model S is recovering ground, now in #6, only 32 units behind the #5 Porsche Panamera.

Of course, Tesla could help and make further improvements in both models…