The European passenger plug-in market registered some 47,000 registrations in June (+24%), with the PEV market growing 34% in 2019, a great performance considering the stagnating performance (-3%) of the overall market.


Looking at other fuels, diesel sales continue its never-ending dive (-21% YoY), with its share dropping to 31%.


The big news in June was the expected Tesla high tide, with the Model 3 scoring another 5-digit performance, while both the Model S & X had their best results in 2019.


Interestingly, despite the landing of the Tesla Model 3, all the remaining Top 5 Best Sellers had 25%-plus growth rates, meaning the Model 3 isn’t drying sales from other EVs, but helping them to thrive.

#1 Tesla Model 3 – After the March deliveries peak, the posterchild for electromobility had its 2nd deliveries peak in Europe, with 11,604 deliveries, with the sports sedan still benefitting from the reservations backlog, with some markets already getting the SR+ versions, while in other countries, like Norway, demand is high enough to be still delivering the AWD versions, so expect another backlog-driven peak in September, so we should only know the organic demand of the Model 3 in Europe on Q4 2019, if not already in 2020. But back at June, looking at individual markets, the midsize model was mainly delivered in Norway (3,012 units, best-selling vehicle in the overall market), Netherlands (2,487, new record and best-selling vehicle in the overall market), Germany (1,336), and France (1,097).

#2 Renault Zoe – The 4,881 deliveries of June signaled a new year best and a 43% growth rate for the French hatchback, an impressive performance, considering the much improved “new” Zoe and the upcoming Peugeot 208 EV (and Opel Corsa EV, etc), are just a few months away. As for market individual performances, the Zoe continues as popular as ever in its domestic market (1,845 units), and in Germany (1,020 units), with the surprise being once again Italy (350 units), with Renault being the main benefitter of the new local incentives.

#3 Mitsubishi Outlander PHEV – The stainless steel Japanese SUV seems unfazed by the passing of time and the arrival of new models, being the only PHEV able to follow the pace of the Best Selling BEVs, with the Mitsubishi model scoring 3,580 registrations in June (up 67%!), continuing to be popular in the UK (650 units), but the new #1 market for the Outlander is now Germany, with 915 registrations, with Norway (540) being the third big market. The success of this PHEV in the BEV-friendly environment is remarkable, but in the long run, one wonders how long the Outlander PHEV will resist to the BEV wave (possible answer: until 2021, when the Tesla Model Y and VW ID Crozz finally land), although, with no direct BEV competitor landing soon, the Mitsubishi model could still pick up a lot of sales this year without major worries.

#4 BMW i3 – The German hot hatch sales were up 26% in June, to 2,520 units, with the BMW pocket rocket benefitting from its unique formula (it is the only Premium City EV in town) to continue expanding its sales, following the EV bubble growth. Looking at individual countries, Germany (714 units), Norway (453) and the UK (350) were the main markets. Looking into 2019, expect the Star Wars-inspired EV to continue growing, being a regular face in this Top 5.


#5 Volkswagen e-Golf – Volkswagen’s electric Golf managed to reach the 5th spot in June, with 2,246 units, up 55% YoY, an amazing performance, considering the Wolfsburg Mother Ship has entered in full-ID-mode, advertising the new BEV family like if it didn’t had already one successful model in the market. But the e-Golf is here and still selling strong, profiting from the strong name recognition, with the German EV main markets in June being Norway (798 deliveries), Germany (635), and the UK (300).

Looking at the 2019 ranking, if the podium positions continue stable, the main news was the BMW i3 surpassing the Nissan Leaf and reaching the 4th spot, with the Japanese hatchback dropping two spots in two months.


The Nissan hatchback really needs a shot of the 62 kWh version to recover, although one questions if the new version isn’t too little, too late.


The Jaguar i-Pace was up to 10th, becoming the 7th BEV in the Top 10, and with the #9 Volvo XC60 PHEV just 176 units ahead, it shouldn’t take long for the British Sports SUV to climb another position and become the Best Selling midsize premium SUV, a title that should remain with the Jag until the landing of the Tesla Model Y.


On the second half of the table, there were several changes, the Audi e-Tron continues to climb positions, with the German SUV up two positions, to #12, while the Kia Niro PHEV climbed to #14 and the Smart Fortwo EV reached the #16 spot.


There was a new entry in the Top 20, with the Tesla Model S resurfacing at #18 (12th BEV in the Top 20), thanks to 1,670 units, and although Tesla’s flagship deliveries were down 21% YoY, it was its best performance in 2019, so it seems the veteran sports sedan has regained enough demand to sustain a Top 20 position this year.

The same can be said about the Tesla Model X, that jumped to #21, just 65 units below the #20 Volvo XC90 PHEV, thanks to 1,118 deliveries, a new year best, but comparing with the same month of 2018, deliveries were down 39%, a steep fall, and while the reason for the Model S drop is home grown (the Model 3 is diverting sales from it), the drop of the Model X has to be found elsewhere, as the Osborne-effect of the Model Y alone does not explain this large drop, so yes, Tesla demand can be diverted into other EVs, if they exist, of course.


Below the Top 20, we should notice the good performance of the new Mercedes E300e/de twins, with 795 registrations last month, a near-record performance for the plugin E-Class, placing the nameplate just 300 units from the Top 20. 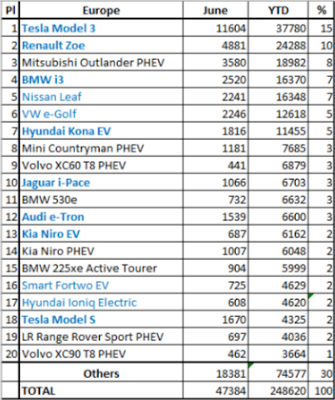