Models: Model 3 shines and BAIC EU-Series climbs to #2
Registrations grew 67% YoY in June, to 265.000 units (2nd best result ever), mostly thanks to the Tesla high tide and the pull-forward of low range Chinese EVs, that now lost access to subsidies, pulling the year to date count to over 1.1 million units, with the 2019 PEV share climbing to 2,4% (3,3% in June).

This month the big news were the Tesla Model 3 reaching a new all-time record for a single model (39.632 units in June), and the rise to the runner-up spot of the BAIC EU-Series, thanks to a personal best 17.916 registrations, with the Chinese sedan jumping two positions in two months.

The Renault Zoe climbed another spot, to #7, thanks to a year best 4.990 deliveries, with the Zoe 1.0 ending its career in grand style, while the evergreen Mitsubishi Outlander PHEV jumped two positions, to #5, scoring almost 6.000 units, its best result since December '15, with the Japanese SUV securing the Best Selling PHEV & SUV titles.

In the second half of the table, the climbers of the month were the #18 Baojun E-Series, jumping 2 positions, thanks to 4.566 registrations, its best result in 12 months, no doubt due to pull forward deliveries, before the end of subsidies, while the Tesla Model X jumped to #16, thanks to 5.603 units, a new year best.

Finally, a mention to the #21 Changan Eado EV, that is just 300 units below the #20 Toyota Prius PHEV, with the Chinese sedan possibly becoming the 17th BEV on the table soon. 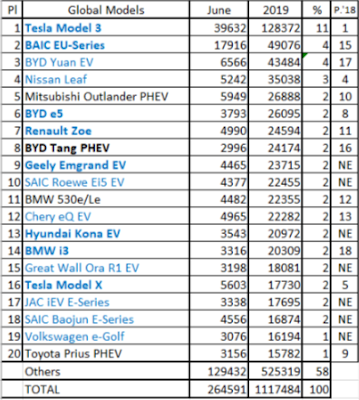 Manufacturers: Tesla jumps into #1
June saw Tesla finally surpass BYD, thanks to a best ever performance of 48.788 units, while the Chinese maker had a somewhat "meh" result, with 24.000 units, being inclusively beaten by BAIC (26.052 units, new YB), that jumped three positions into #3, with Tesla now being chased by a pack of three (3!) Chinese manufacturers.

We have to go down to #5 to see the first Legacy OEM, BMW, but if we count only BEV * registrations, then Nissan becomes the best selling legacy, in #4, with only one other established maker (Hyundai, in #8), in a sea of Chinese makers...With Tesla on top.

Looking elsewhere, the second half of the table saw Kia jump three positions, to #11, while Changan did even better, shooting six positions, to #12, thanks to a record 12.562 units. 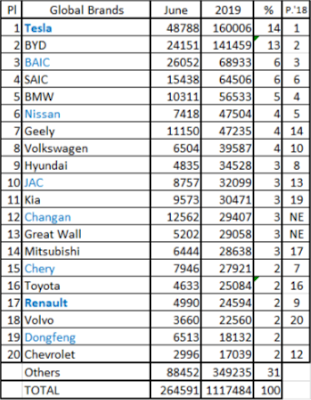 * - Breaking down the OEM sales that sell both BEVs and PHEVs, we can see that Chinese have 66%-plus share of BEVs, with their BEV share rising every month, while legacy OEMs (Hyundai excepted) have a low share (a little more than a third) of BEV sales.

Once again, Chinese makers are reacting faster to the increasing BEV trend in the market.
Published by José Pontes at July 31, 2019