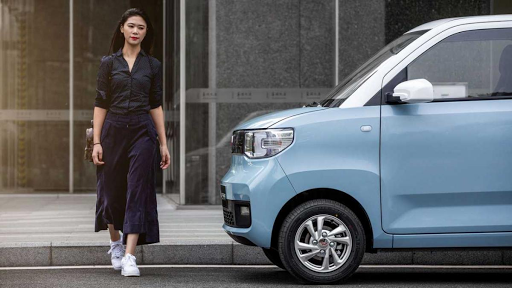 Looking at August Best Sellers, we have 2 midsize sedans ( #1 Tesla Model 3, #3 GAC Aion S) and 3 City EVs, confirming the return of small EVs to the spotlight.

The poster child for electric mobility hit 11,811 units last month, and while it’s not its all time best, Tesla’s midsizer continues firmly above the 10,000 mark. And the Model 3 is starting to get in the way of the category Best Sellers in the overall market, as the Californian was not that far-off from the BMW 3-Series (16,919 units), Mercedes C-Class (14,249) and Audi A4 (13,053), so the Tesla sports sedan still has some room to grow. Will we see it reach some 15,000 units/month cruise speed this year? Another question is, will Tesla deliver a surprise performance in September? Mmmm...Discuss.

A big name for such a small car, the Wuling EV, let’s call it that way, scored 9,150 units last month, thanks to a steep production ramp up, so expect the tiny four-seater to hit five-digit performances soon. Why the reason for this overnight success? Well, from the start, it is one of the cheapest EVs on the market ($4,200!!!), and yet, it’s not all that bad, as the SAIC-GM-Wuling joint-venture model can seat 4 people (or 3 people and a bit of cargo, or 2 with a fair amount of cargo – 741 liters), in car that is a tad larger (2,917 mm / 114.8 in) than a Smart Fortwo EV, sure, range is not brilliant (smaller battery version has 9.2 kWh battery, top spec version has a 13.8 kWh battery), just like the motor (27hp), but it has only 665 kg curb weight to carry around and is highway capable, so in order to have the 4,200 USD price, without subsidies, one can’t expect miracles... At this price level, the Wuling EV is in position to be a disruptive force in urban mobility, not only against 4-wheeled private transportation, but also against 2 and 3-wheelers. This EV could be a game changer for many, and not only in China...

GAC’s sleek sedan was 3rd in August, having registered 4,071 units (excluding the 665 Toyota-badged iA5 units), a new year best, so it seems the Aion S has found a way to live with its crossover sibling, the new Aion V (2,086 units last month). One of the most competitive domestic electric sedans on the market, the Aion S should continue to be a regular in this Top 5, being a strong candidate to the 2020 medals positions.

A few decades ago, Hollywood had a Rat Pack, and maybe inspired by that one, Great Wall decided to create its own Cat Pack, transforming its tiny R1 Smart-lookalike into the Black Cat, launching the R2 model (think Scion XB/Toyota Urban Cruiser kind of vehicle) as the White Cat, that delivered 1,035 units last month, and to lead the Pack, Great Wall is now preparing the launch of the Good Cat, a chunky (and funky) compact hatchback (VW Golf sized) that kinda looks like a Porsche 356 in the front, a Toyota from the side, and the back...Well, it’s its own thing. But enough of the Good Cat, we are here to talk about the Black Cat, that delivered 3,748 units in August, the City EV best score since the new subsidy rules were enacted, more than a year ago. Does this mean the new name will allow a second youth to the Ora model? To be answered in the next few months...

Baojun works as the more hip and upmarket version of the Wuling EV, and thanks to their E-Series (E100/200/300) lineup of City EVs, the SGMW (SAIC-GM-Wuling joint-venture) offspring has seen its demand stay high during the last months, winning a 5th spot in August, thanks to 3,312 units last month. The access to the current subsidy, added to competitive pricing (CNY 93,900 / USD 14,700) before subsidies, makes it an appealing model for young urban drivers, as well as car-sharing companies and other kind of fleets.

Looking at the 2020 ranking, if the Model 3 is the undisputed leader, below it, everything is up for discussion, with the #3 GAC Aion S shortening the distance, to less than 1,000 units, to the 2nd placed BYD Qin Pro EV, but both should be surpassed in a couple of months by a rising star...

...The Wuling EV, that after joining the table in July, in #13, last month the Wuling model jumped 7 spots, to #6, and should reach the 4th place in September, only to surpass the aforementioned two by October.

This move highlights the latest trend, City EVs are returning to the spotlight, not only with the Wuling EV, but also with the newly called Great Wall Ora Black Cat, that climbed to #8, and the #9 Chery eQ, that delivered 3,307 units, its best score in over a year.

But it weren’t only with the City EVs shining, as the MG ZS EV was also up, to #15, while BYD saw two of their models climb, with the Tang PHEV climbing two positions, to #17, thanks to a Year Best performance of 1,525 deliveries, while the Song Pro EV was up to #19, and despite staying in the same spot, the BYD e2 had a Year Best score of 1,557 units.

Highlighting BYD’s positive month, the Han siblings saw the benefits of the production ramp up, with the EV version scoring 2,700 units, while the PHEV registered their first 1,300 units, if we to count both together, the full size BYD would feature on our monthly Top 5.

A final mention to two startup EVs, with the #11 Li Xiang One full size SUV scoring a record 2,711 units, while the Weltmeister EX5 had its best performance this year, with 2,042 units.

“Yeah, but August is not a peak month for Tesla...” – True, but Tesla’s flagship SUV top score this year in China was 650 units, last March, which pales next to the Li Xiang One regular scores, and the NIO ES8 4,506 deliveries this year are two times the score of the Model X...

Currently, the Model S & X are weak points for Tesla in China, as they are being trailed by several opponents, be it startups (NIO, Li Xiang), local OEMs (BYD), or foreign ones (BMW), which is a stark contrast with the current Model 3 domination of the midsize category...

SAIC is 3rd, although i should say, it’s more SAIC+SGMW, because if we remove the joint-venture small EV models from the SAIC tally, the Shanghai maker would have only 6% share. Technicalities, technicalities....

Below the podium, Volkswagen (6%) is holding on to #4 by just 2 units(!), with GAC (also 6%) looking forward to surpass the German maker in September, while NIO (4%) has surpassed BMW and is now #6, and with the #5 BAIC less than 300 units away, it is waiting for a chance to climb higher (In September?). 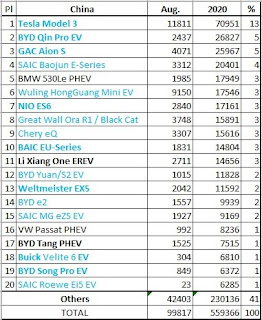