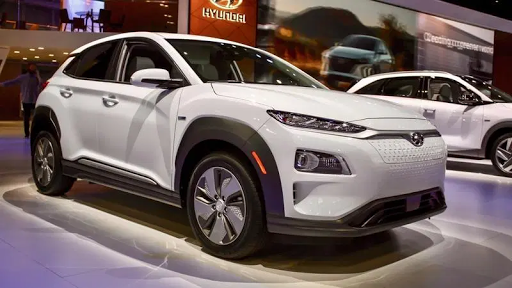 The European passenger plugin market is on fire, having registered over 97,000 registrations in August (+171% YoY), placing last month plugin share at 11% share (5.7% BEV), and pulling the 2020 PEV share to 8.4% (4.5% for BEVs alone), which is getting mighty close to the disruptive 10% mark....
..So expect next year to be #Disruption '21!
This sales push is benefiting BEVs (50,232 units, +112% YoY), but especially PHEVs, whose sales are jumping through the roof (+285%!), pulling the BEV/PHEV breakdown towards parity between both technologies, as plugin hybrids had 48% of registrations last month, versus 47% in the YTD tally.
With fresh units coming from Fremont, the Model 3 won last month Best Seller title, its first since last April, Tesla is preparing a high tide in September, that added to the VW ID.3 official landing and a predictable strong month from the Renault Zoe, we should have all three top sellers next month hitting 5-digit scores...
We have one new face in the Top 5, with the Mercedes A250e joining the Best Sellers list, being one of the most interesting PHEVs around, while the Kia Niro EV ended the month in #6, thanks to 3,381 deliveries, its second record performance in a row!.
Looking at June Top 5 Models:
#1 Tesla Model 3 – The sports sedan returned to form, by having 7,020 deliveries last month, allowing it to have its first monthly win since last April, which is a promising sign for the (super-)September high tide, so a 17,000 units seems like a realistic target. Regarding August, the Model 3 main markets were Germany (2,824 units), the UK (950) and The Netherlands (609).
#2 Renault Zoe – The 6,183 deliveries are the result of the recent uptick in orders of the French hatchback, and despite being down in August on the consistent 10,000-ish performances of previous months (August is French holiday season), expect it to go back at in (Super-)September. Last month, the main market this time was Germany (2,210 units), followed by France (1,618 units), Italy (509) and the UK (350). For the coming months, expect the Zoe to continue on the top positions, running with the Tesla Model 3 and VW ID.3 for the leadership .

#3 Ford Kuga PHEV - The Kuga PHEV (Euro-spec Ford Escape PHEV), is doing wonders for Ford, as the carmaker finally found a plugin success story in Europe, in August the compact crossover scored 5,055 registrations, earning its 4th Best Selling PHEV monthly title in a row, making it the new reference in the plugin hybrid field. The markets where the Dearborn plugin was in high rotation were Germany (1,588 units), Denmark (1,509 units, Best Selling model in the overall market!) and the UK (350). With the Kuga PHEV usable electric range and competitive pricing, the Ford model is now one of the best value for money plugin hybrids out there.
#4 Hyundai Kona EV – Chronically limited by production constraints, Hyundai has finally opened the flood gates for its small crossover, thanks to the Czech plant production, scoring 4,054 deliveries in August and allowing another Top 5 standing. After the waiting list being finally emptied (by September?), we will finally start to see the real demand level of the small crossover (3,000/month?). Back to August, Germany was by far the best market for the Hyundai nameplate, with 1,397 deliveries, followed by France (420 units) and Norway (408).
#5 Mercedes A250e – Thanks to competitive pricing (for a Premium brand), usable electric range (64 kms / 40 mi WLTP), and even CCS availability, the compact Mercedes has become the maker star player, with August registering a record 3,505 units, it's second record performance in a row, with the biggest market being its homeland Germany, with 1,939 registrations, followed by France, with 260 units, and the UK (253 units).
Looking at the 2020 ranking, there were two changes in the top places, with the Hyundai Kona EV jumping two spots, to #4, but the most significant change happened below it, with the Ford Kuga PHEV surpassing the Mitsubishi Outlander PHEV and becoming the new Best Selling plugin hybrid in Europe, if the compact SUV manages to keep the leadership until the end of the year, it will be an historic moment, as it will be the first time since 2012 that the Outlander isn't the Best Selling PHEV in Europe!
With these changes, the Top 5 is now 100% BEV, and with models from different classes, from the small Renault Zoe, to the compact VW e-Golf, the midsize Tesla Model 3 and the luxury Audi e-Tron, with the Hyundai Kona EV thrown in, for those that want something different. It's like these models are the BEV template for each of these categories (well, the e-Golf is on its last legs, but with its ID.3 successor now spreading across Europe, Volkswagen will continue to have the template for the compact EV in Europe for years to come).
Speaking of VW's new baby, in (Super-)September, the VW ID.3 is landing with a bang, with 20,000-plus 1st Edition deliveries, that added to some 11,000 Zoe's and 17,000 Model 3's, it should provide at least 48,000 registrations for September in just 3 models! Add a minimum of 80,000 units from the remaining market, and we should have some 130,000 units being delivered in one month, and some 12-13% market share!
Back to August, the second half of the table had a few position changes, with the Volvo XC40 PHEV jumping two spots, to #13, while the small VW e-Up climbed to #16 and the Mercedes A250e joined the ranking, in #18, thanks to a record 3,505 units.
But the A250e wasn't the only Mercedes to shine, as the GLC300e scored a record 1,749 performance last month, while the E300e/de (1,254 units in August) and the C300e/de (1,441), jumped to #21 and #22, respectively, so we could have thee Mercedes in the table soon, and as if that wasn't enough, there were two other models from the Daimler stable to reach four-digit scores last month, with the Mercedes EQC registering 1,292 units, while the tiny Smart Fortwo EV scored 1,325 deliveries, thus making 6 models from the OEM with 1,000-plus scores!
And Mercedes is now starting to ramp up production of other models, as the CLA250e (565 units), B250e (315) have started to see their numbers rise and should hit significant volumes soon, while the GLA250e (60) and EQV (26) are waiting in line for their turn...The three pointed-star maker started late, but is electrifying its (long) lineup at breakneck speed...After all, Daimler is one of the worst CO2-emitting OEMs in Europe and the fines are heavy, so might as well go for plugins and comply with the rules, right?
Not to be outdone by its Stuttgart rival, BMW also pulled a few rabbits from the hat, and while it's not the model onslaught of Mercedes, the production ramp up of the Mini Cooper EV (1,709 units last month) and BMW X1 PHEV (1,545), added to the good result of the BMW X5 PHEV (1,334 units, its best score since January), have helped to counter balance the so-so results of the BMW i3 and 330e.
Still outside the Top 20, the PSA Group is also ramping up deliveries, with the small Opel Corsa EV hitting a record 1,487 deliveries, while the Peugeot 2008 EV crossover registered 1,331 units in August, with the French maker expecting this last model to be its Third Musketeer in the Top 20.
In the brands ranking, we have the most balanced race in the history of this ranking, with 5 brands separated by 1%, with 9% share we have Volkswagen, BMW and Renault, while with 8%, we have Volvo and Tesla...And don't forget the rising (7%, up 1%) Mercedes, in 6th! 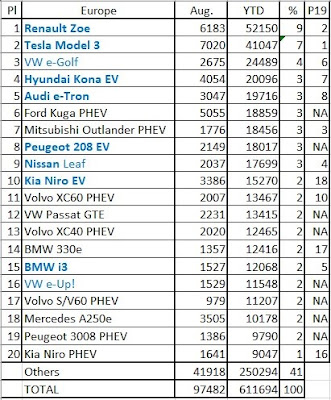 Tesla's midsize sedan sales are in another galaxy, and has even seen its sales increase 29% YoY last month, so it won't have significant competition in the near future, as the recently arrived Polestar 2 (1,144 units last month) is present in a limited number of markets and will remain a niche player this year, with expansion plans only set to be enabled in 2021. Same story for the BMW iX3, with the first deliveries set for the summer of next year, do not expect volume numbers from it for a long, long time.
The real competition will only come when the Tesla Model Y lands, not only it will drain the Model 3 sales, but it should also outsell it.
As for the remaining podium, the Mercedes EQC has finally surpassed the Jaguar i-Pace, becoming the new runner-up, while the British sports SUV has seen its sales decline in August by 19% YoY, to just 588 units, which soon could place it under the firing range of the new Polestar 2, as the Sino-Swede is said to have its own Super-September edition (Around 1,500 deliveries) happening.

The e-Tron domination is unquestionable and continues to grow, with the Big Audi scoring  3,047 units last month, representing a 141% sales increase YoY, and with Tesla basically giving up on the Model S & X, not only the #2 Porsche Taycan (1,183 units last month) will continue to extend its lead, but both Teslas will become easy prey for anyone (Audi e-Tron GT, Mercedes EQS, BMW iNext...) that lands on this still rarefied market.
Just to have an idea, last month the Tesla Model S was the best selling of the flagship Teslas, by registering 109 units, down 82% YoY...
Published by José Pontes at September 25, 2020