Looking at last month Best Sellers, if Volvo secured another monthly win, with the XC60 PHEV delivering 751 units, below it, it is Kia that is shining, with 3 models in the Top 5, with the highlight being the #2 Kia Niro PHEV reaching the runner-up spot, with a record 627 registrations, with the Ceed PHEV in 3rd, with 443 units (proving once again the popularity of plugin station wagons in Sweden), while the Kia Niro EV was 5th, with 358 deliveries, being last month Best Selling BEV.
A mention to the #7 spot of the Polestar 2 last month, with 284 deliveries, so expect it to reach the Top 5 in September, and then become a familiar face among the best sellers.
Looking at the 2020 ranking, with the exception of the #3 Volvo XC60 PHEV coming closer of the #2 VW Passat GTE (only 19 units separate them), there is not much to talk on the top positions, with the first change happening in the 6th spot, with the Tesla Model 3 benefiting from fresh units (235 deliveries, best off-peak performance in a year), to climb one position, and with a stronger than usual high tide in September, it might climb another position or two.

The remaining position changes on the Top 10, benefited Kia, with the Ceed PHEV jumping 5 spots, to #8, while the Niro EV was up two spots, to #9.
Highlighting the good moment of Hyundai-Kia, on the second half of the table we have the Hyundai Kona EV scoring a record 230 deliveries, allowing it to reach #16.

But the ranking changes didn't ended there, the Volvo XC40 PHEV was up to #11, while the BMW 330e has seen its sales grow in August, thanks to the first deliveries of the Touring (aka station wagon) version, allowing BMW's midsizer to climb one position, to #18.

Outside the Top 20, we should mention the great start of the Polestar 2, with 284 units last month, so we should see the Sino-Swede in the table soon, while another future sales champion has landed in August, with the Toyota RAV4 PHEV registering an impressive 147 units in its landing month, and a final mention goes to the ramp up of Mercedes, with three models (A250e - 175 units; C300e/de - 147; E300e/de - 178) scoring record deliveries, with the local Mercedes importer benefiting from the recent production ramp up in the Mother Ship.
In the manufacturers ranking, Volvo is in the lead, with 23% share and all the lineup on the Top 20, while Kia (20%, up 1%) keeps the 2nd place, and Volkswagen (12%) closes the podium, ahead of Tesla (6%). 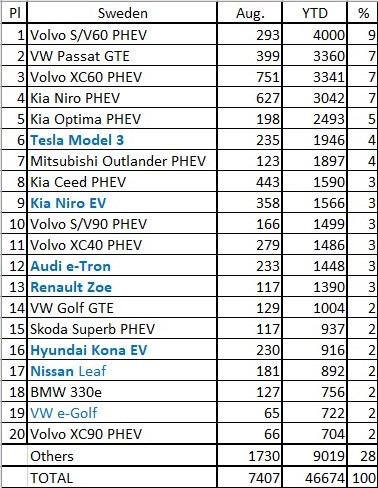