The European passenger plugin market is on fire, having registered a record 160,000 registrations in September (+166% YoY), placing last month plugin share at 12% share (7.1% BEV), and pulling the 2020 PEV share to 9% (4.9% for BEVs alone), which is getting mighty close to the disruptive 10% mark....
..So expect next year to be #Disruption '21!
This sales push is benefiting BEVs (91,615 units, +120% YoY), but especially PHEVs, whose sales are jumping through the roof (+268%!), pulling the BEV/PHEV breakdown close to parity between both technologies, as plugin hybrids have 46% of registrations this year.
With fresh units coming from Fremont, the Model 3 had the expected end-of-quarter high tide, winning last month Best Seller title, its second in a row, and despite losing the Best Seller title to the Californian, the Renault Zoe scored a record month, with over 11,000 deliveries, while the last place of the podium went to the VW ID.3, that officially landed with a bang, with over 8,000 registrations, although many were expecting VW's hatchback to land with a five-digit performance...Maybe in October?
Looking at September Top 5 Models:
#1 Tesla Model 3 – The sports sedan returned to form in a high tide month, by having 16,125 deliveries last month, a new Year Best. Regarding September, the Model 3 main markets were the UK (4,800 units, a new record), Germany (2,776), Norway (1,116 units, new year best) and France (1,083). While October will see the Model 3 having a slow month, November should bring the sedan back into the first positions again (maybe with the help of the Made-in-China SR version?), while December could bring another Best Seller title for the Californian.
#2 Renault Zoe – Super-September brought a record 11,026 deliveries to the French model, with Renault going all in and milking its EV until the last drop, in order to keep five-digit scores until the end of the year and recover the European Best Seller title. Last month, the main market was Germany (3,603 units, new record), followed by France (2,878), the UK (1,800 units, new record) and Italy (676). For the coming months, expect the Zoe to continue on the top positions, running with the Tesla Model 3 and VW ID.3 for the leadership.

#3 Volkswagen ID.3 - After months (years?) of anticipation, the 2021 Best Selling EV in Europe has finally landed, having delivered the first 8,571 registrations, surely the first of several (hundreds of) thousands. Volkswagen's new Golf IX MEB EV main markets for September delivery were Norway (1,989 units), Germany (1,771) and the UK (650), with France (616) and The Netherlands (609) not far off. Expect VW's new baby to become a familiar face in the medal positions, running with the Tesla Model 3 and Renault Zoe for the monthly Best Seller titles.
#4 Hyundai Kona EV – Chronically limited by production constraints, Hyundai has finally opened the flood gates for its small crossover, thanks to the Czech plant production, scoring a record 6,143 deliveries in Super-September and allowing another Top 5 standing. After the waiting list being finally emptied (in October?), we will finally start to see the real demand level of the small crossover (3,000/month? More?). Back to last month performance, the UK was the best market for the Hyundai nameplate, with a record 1,800 deliveries, followed by Germany (1,526 units) and France (559).
#5 Mercedes A250e – Thanks to competitive pricing (for a Premium brand), usable electric range (64 kms / 40 mi WLTP), and even CCS availability, the compact Mercedes has become the maker star player, with September registering a record 4,772 units, it's 3rd record performance in a row, with the biggest market being the UK (1,900 units, a new record), followed by Germany, with 1,404 registrations, and France (382 units, new record). Is this the future of plugin hybrid models?
Looking at the remaining September Best Sellers, the Kia Niro EV once again ended the  month in #6, and once again with a record score, in this case 4,565 deliveries, its second third record performance in a row!
In a record month, several models hit their personal bests, besides the aforementioned models, the Volvo XC40 PHEV (4,199 units), Mercedes GLC300e/de (3,043), Audi Q5 PHEV (2,972), and BMW X5 PHEV (2,799) all hit record scores, all of these sharing a common trend: Premium plugin hybrid SUVs. Let's hope these tanks are at least plugged in regularly...
On the BEV side, we also have models shining, like the Opel Corsa EV, that hit a record 2,725 registrations last month, that is already closing in to its French cousin Peugeot 208 EV (2,963 units, best result since February), while the Polestar 2 hit a personal best 2,461 deliveries,  but even veterans like the BMW i3 (2,960 units, new year best) or the Nissan Leaf (3,244 units, best result in 18 months), which means that the current EV fever is not only benefiting recent launches, but also older models.
Outside this Top 20, a reference to several models in ramp-up mode, like the Mini Cooper EV, that hit 2,062 units last month, the Mercedes CLA250e sports sedan scored a record 1,314 units, while the Skoda Superb PHEV registered a record 1,757 units.
Interestingly, the other Skoda plugin, the little Citigo EV, also scored a record result, with 1,757 units, beating its German (e-Up - 1,728 units) and Spanish (e-Mii - 713) twins.
Three other models reached relevant scores, with the Smart Fortwo EV reaching a record 2,114 units(!), while SAIC's MG ZS EV registered a record 2,181 units and the Kia Niro PHEV registered 1,959 units, a new best for the Korean plugin hybrid, that despite this, dropped from the YTD Top 20...With everyone pushing their limits, sometimes doing your best is simply not enough. 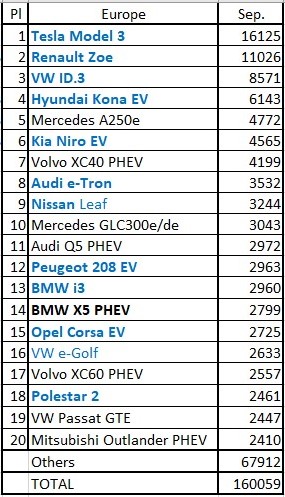 Looking at the 2020 ranking, the top positions remained the same, with the Renault Zoe keeping enough distance from the runner-up Tesla Model 3 to remain a comfortable leader, while the Hyundai Kona EV is getting ready to take the 3rd spot from the sunset-mode VW e-Golf.
The troubled #6 Ford Kuga PHEV remained the Best Selling PHEV, but lost some ground to the veteran Mitsubishi Outlander PHEV, now just 206 units behind, but both have to look behind too, as both the rising #11 Volvo XC40 PHEV and #15 Mercedes A250e are delivering units in record numbers and could steal the show in the last minutes of 2020, if the Outlander PHEV loses the 2020 title, it will be an historic moment, as it will be the first time since 2012 that the Outlander isn't the Best Selling PHEV in Europe!
Looking at position changes, the Peugeot 208 EV and Nissan Leaf climbed one position each, to #7 and #8, respectively, while in the second half of the table, the BMW i3 was up to #14.
The #10 Kia Niro EV is closing in to the #9 Mitsubishi Outlander PHEV, and should surpass it in October, thus making 8 BEVs in the 9 first spots.
We have a new face in the Top 20, with the BMW X5 PHEV yacht large SUV joining the table in #19, being only the second full-size model on the Top 20 (the other is the #5 Audi e-Tron).
In the brands ranking, Volkswagen (10%, up 1%) has won precious ground over the runner-up Renault (9%), while Tesla (9%, up 1%) rose to the 3rd spot, at the expense of BMW (8%, down 1%), with the Bavarian maker falling from #3 to #5 in just one month, as the #4 Mercedes (8%, up 1%) and #5 Volvo (8%) have surpassed it in September. 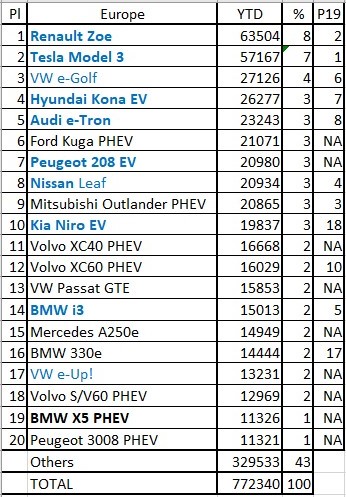 Tesla's midsize sedan sales are in another galaxy, and although it has seen its sales drop 8% YoY last month, it won't have significant competition in the near future, as the recently arrived Polestar 2 (2,461 units last month) is present in a limited number of markets and will remain a niche player this year, with expansion plans only set to be enabled in 2021, while the Ford Mustang Mach-E production levels are still a question mark. As for the BMW iX3, i believe the Bavarian maker will already be happy if it sells Mercedes EQC-level of deliveries...
The real competition should only come when the Tesla Model Y lands, not only it will drain the Model 3 sales, but it should also outsell it.
As for the remaining podium, the Mercedes EQC has increased its lead over the Jaguar i-Pace, profiting from the sales decline of the British sports SUV (-23% YoY), but in September both lost to the new Polestar 2, as the Sino-Swede had its own Super-September, by delivering 2,461 units, far more that the 1,547 of the EQC or the 994 of the i-Pace.

The e-Tron domination is unquestionable and continues to grow, with the Big Audi scoring  3,532 units last month, representing a 129% sales increase YoY, considering the already significant sales volumes of the Belgian-made Audi, one wonders for how long will this kind of growth rates be sustained, and when will the peak e-Tron moment arrive...
With the #2 Porsche Taycan (1,017 units last month) now in cruise speed, both flagship Teslas shined in September and managed to recover some space to the Porsche sports sedan, with the Model S delivering 1,328 units, its best result in 15 months, while the Model X did even better, by registering 1,633 units, the Sports-Minivan-SUV-Crossover best score since December 2018...
...It looks like many buyers that were waiting for a refreshed Model S/X reveal on Battery Day, just went to the closeby Tesla Store on the next day, and bought an inventory Model S/X, that, coincidentally or not, by that time had a higher than average stock level...One would almost say that Tesla sent more inventory units than usual in Q3, because it knew this would happen...
This is still a rarefied market, but in the next few months there will be several models landing (Audi e-Tron GT, Mercedes EQS, BMW iNext...), so the 2021 race should be more interesting to follow.
Published by José Pontes at October 28, 2020